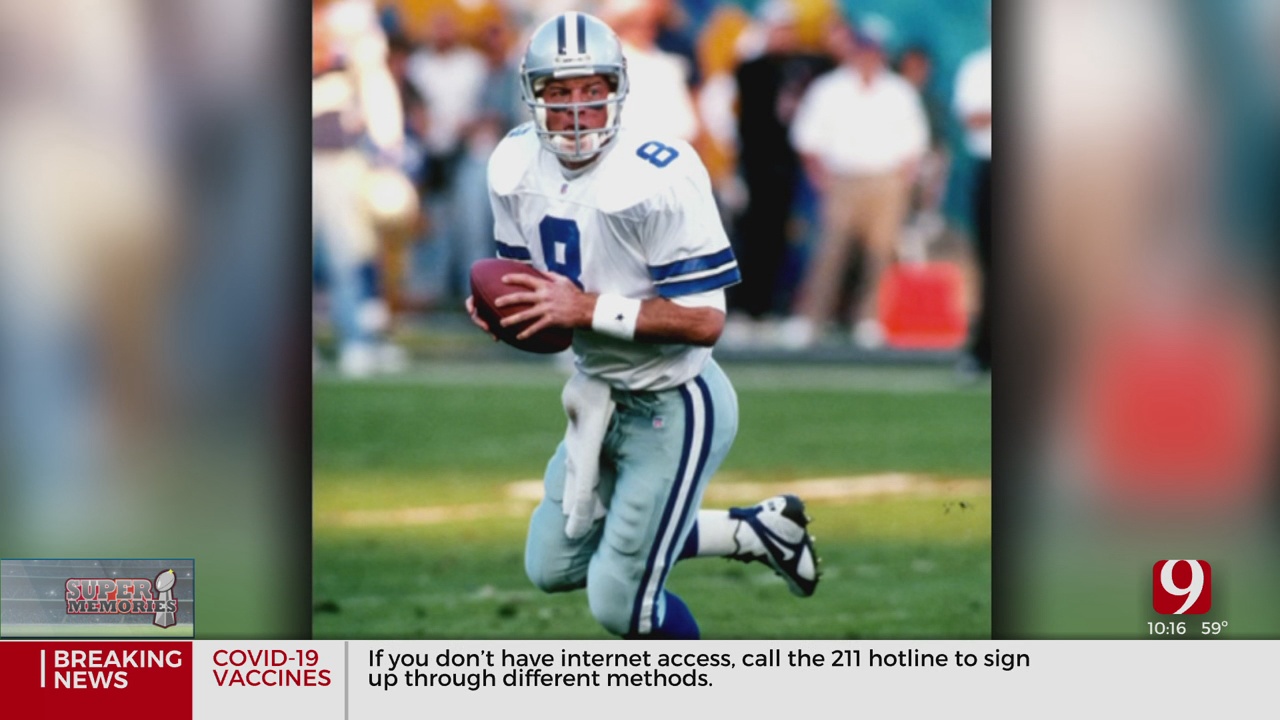 He's a three-time Super Bowl winner, a Hall-of-Famer and has been a broadcaster for six Super Bowls.He was the quarterback of America's Team and as Super Bowl 55 approaches, Troy Aikman sat down with News 9’s Dusty Dvoracek.

“I’m going out on a limb here, but I think that you are the first Henryetta High School Graduate to win a Super Bowl. Is that fair to say?” Dusty asked Aikman.

And Aikman said he still keeps in touch with many of those folks.

“In eight grade was a guy named Daren Leslie and he’s still my best friend to this day. I keep up with a number of classmates. We get together. In fact, we’re having a reunion coming up here in the couple months.”

From high school in Henryetta Troy went to Norman where he started at OU as a freshman. An ankle injury ended his season and ultimately led to his transfer to UCLA. After two seasons with the Bruins, Troy entered the NFL draft. New Dallas Cowboys owner Jerry Jones made him the first pick. As most teams with early draft picks, the Cowboys needed some help.

“You know I didn’t even win a game as starting quarterback until my second season,” Aikman recalled. “I always thought, Dusty, that in that rookie season we eventually would be a good team.”

And with a lot of hard work from the players and in the coaching/drafting department from Jones and Jimmy Johnson, things started to change.

“I really believed that in some point in my career I would win a Super Bowl. But never imagined that it would happen just three years later from when we were just 1-15 and I as the starter was 0-11,” Aikman said.

In 1992, Troy and the boys won Super Bowl 27 against the Buffalo Bills in Pasadena, Troy's college stomping grounds.

“We practiced at UCLA, so I used the locker room that I had there in college. And then, of course, playing in the Rose Bowl is where I played my collegiate games as well,” Aikman recalled.

Despite a tough start the next season, the Cowboys would continue to fight, making their way to another Super Bowl against a familiar foe.

“Now we’re playing Buffalo again, and it’s their fourth consecutive time to play in the Super Bowl,” he said. “I remember thinking, man at some point Buffalo’s going to win this game and I just hope it’s not this year. You know?”

Behind the scenes issues led to Barry Switzer taking over as coach in 1994. The team was close enough to smell the Super Bowl but lost in the championship game.

“It’s amazing how quickly you can regain confidence and momentum,” Aikman said.

That happened with the Cowboys winning another Super Bowl in 1995 against the Steelers.

“I remember being in that third Super Bowl and just saying to myself, ‘man, I’m going to remember every single minute of this week. Every single minute of this pregame and the entire game,’” Aikman said. “You know there’s so many players that have played in the NFL. Great players that have never experienced the pinnacle of our profession and I hate that. Because you’ve experienced it, you say ‘Gosh, this is really why you do all the work.’ But for guys who have never gotten to do it. I really hate that for them.”

Out of all of those big games, a memory from Troy's first Super Bowl in the Rose Bowl that reigns supreme.

“In that game we had a 14-point lead at the time I believe, and it was late in the fourth quarter and I hit Alvin Harper up the right side for a touchdown to go up,” Aikman said. “So, after we hit the pass, you know I came running down the field and I was given the number one. So only time my career I’ve ever done that because we truly were number one at that point so that stands out.”

Aikman then turned his talents to the broadcasting booth. And he said he was more nervous for his first Super Bowl in the booth.

“You know, you understand it as a broadcaster, and as a former player that there is no scoreboard. And that’s the hardest thing to get used to when you walk out of a booth and you don’t have the immediate feedback as to whether you were good or not,” he said.

And even though he's got the rings and the Hall of Fame career in and out of the booth, he's also a super dad, who will always share his strong work ethic.

“I’ve got young girls and we talk about it. That in life no matter what it is you want to accomplish, that it takes a lot of hard work. There are no shortcuts, and we didn’t have ‘em either.”