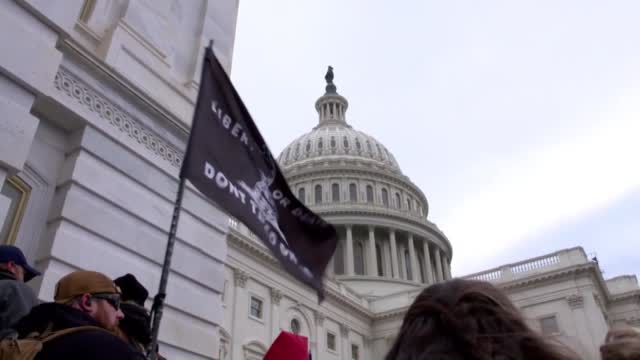 As the investigation into the Capitol Hill riot intensifies, officials are working to identify the individuals behind it.

The Federal Bureau of Investigation launched a website to collect tips and digital media relating to the riots. The agency has received over 4,000 tips on its website.

Misinformation about who was behind the violence has spawned new conspiracy theories, in an attempt to shift blame. Those theories have reached several President Trump supporters who attended Wednesday's rally.

Shortly after President Trump encouraged supporters to march to the Capitol, some decided to march a little farther and cause destruction to the federal building.

But for some Trump supporters, that ugly reality just doesn't fit their own.

"Trump supporters wouldn't do that and they wouldn't, you know, break things and steal things," Marina Wallis, a supporter of the president, told "CBS This Morning" co-host Tony Dokoupil.

One supporter refused to believe that such death and destruction could be caused by Mr. Trump's supporters and shifted the blame to another organization

"I believe there are patriotics out there. And I also believe that most of the people that were in the Capitol were antifa," said one supporter.

Supporters along with conspiracy groups like QAnon, an online community of far-right believers who are known to spread false information on social media, believe that the rioters were likely antifa infiltrators or members of the Black Lives Matter Movement disguised as Trump supporters.

"They're doing the damage to make our group look bad," Katie Taylor said.

It's yet another baseless conspiracy theory of the Trump era that quickly spread online during and after the riot.

"There is no way anyone will ever convince me Joe Biden got more votes than President Trump," Taylor said.

An article posted on the website for the right-leaning newspaper The Washington Times claimed the facial recognition company, XRVision, identified members of antifa in the crowd using its technology.

A spokesperson for the facial recognition company told CBS News an attorney instructed the Washington Times to retract its claims and publish an apology. The newspaper did not respond to CBS News' request for a comment but has since updated the original story with a correction stating that XRVision did not identify any members of antifa in the crowd.

The article was tweeted by Republican Rep. Matt Gaetz.

A spokesperson for XRVision told CBS News that their analysis of footage of the crowd actually identified two individuals affiliated with "The Maryland Skinheads," a neo-Nazi organization. A third individual, a known QAnon supporter, was also identified.

XRVision has identified that QAnon supporter to be Jake Angeli. He is described by The Arizona Republic newspaper as "a fixture at Arizona right-wing political rallies." During the Capitol riots, he was seen wearing a fur headdress.

Also among those who made it inside was GOP candidate for the Hawaii state house, Nick Ochs, who lost his November race.

He was endorsed by President Trump ally Roger Stone and is a known member of the Proud Boys, a far-right extremist group.

Barnett is a Trump supporter who believes the election was stolen. He was joined by many others in Trump paraphernalia, as well as some people wearing things associated with QAnon or hate groups.

Experts in misinformation say it's a now-familiar process, where people who want to believe something find those beliefs reinforced online and through far-right media like OANN and NewsMax.

"The fact is that there are massive audiences online that are hungry for disinformation and misinformation to validate their own beliefs," said Jared Holt, a visiting research fellow at the Atlantic Council's Digital Forensic Research Lab.

He monitors extremist communities online. Holt says that in the weeks leading up to the Trump rally, the rhetoric among extremists supporters of the president grew more desperate and more heated.

"There were discussions about trying to get weapons into D.C. … There were conversations about surrounding the Capitol and then in the last few days the discussion shifted into even more extreme territory about taking matters into their own hands," he said.

Holt believes there is a clear link between online disinformation, extremism and real-life consequences.

"We have to start treating this as the threat to democracy that it truly is."

More than 74 million people voted for the president. Just a small fraction of them showed up Wednesday and an even smaller number participated in the assault.