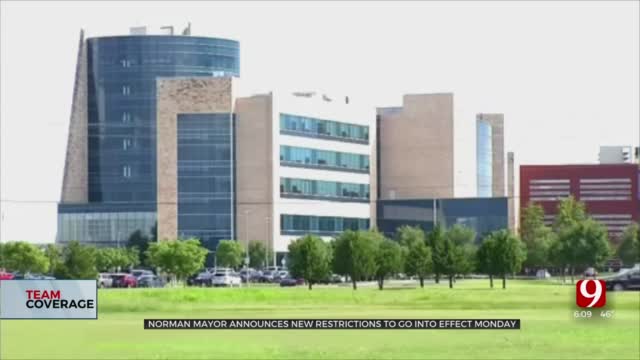 In an effort to flatten the COVID-19 curve, Norman Mayor Breea Clark announced Friday night she will sign a proclamation with new restrictions that will go into effect on Monday.

Mayor Clark spoke to News 9 Saturday and said this decision was not an easy one, but after speaking to medical professionals, first responders and community partners, she felt it was something that had to be done.

Under the proclamation, restaurant, bar, and fitness center capacity will be reduced by 50% as set by the Fire Department.

Organized gatherings will be capped at 50 people and organized indoor sports will have numerous rules like one spectator per athlete, mask requirements for everyone except the athletes currently playing, and closing concession areas.

Mayor Clark said the changes are being made in the midst of recent record-high seven- and three-day rolling case averages.

“We need to do better, and our first responders and medical professionals deserve some help. If we’re going to ask them to work shift after shift, exhausted, both physically and emotionally, the least we can do is try to help," Mayor Clark said.

Mayor Clark said that doesn’t mean places of worship will be capped at 50 people, since each family unit is considered a gathering. It will affect capacity for events like weddings and funerals.