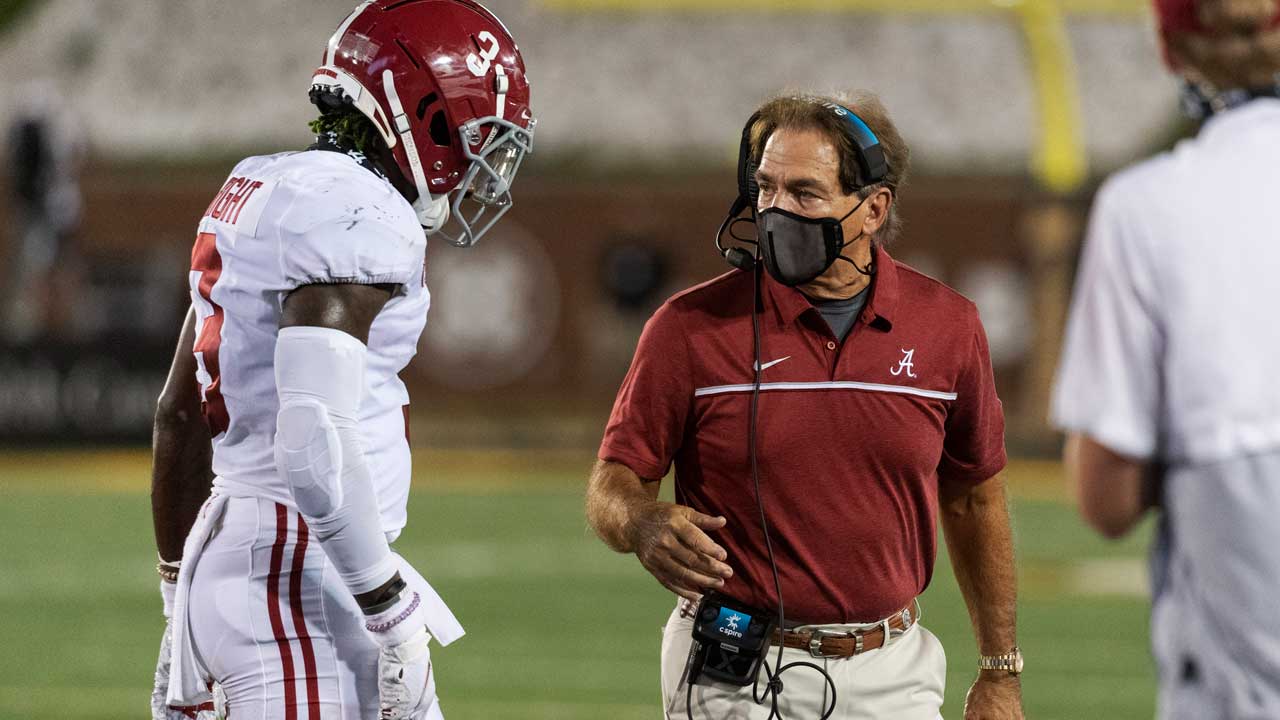 Coach Nick Saban of No. 1 Alabama has tested positive for COVID-19 just days before the Iron Bowl with No. 22 Auburn.

“He has very mild symptoms, so this test will not be categorized as a potential false positive,” the statement said. “He will follow all appropriate guidelines and isolate at home.”

The Crimson Tide is set to face its biggest rival Saturday at Bryant-Denny Stadium without the 69-year-old, six-time national champion coach. Offensive coordinator Steve Sarkisian, a former head coach at USC and Washington, will oversee preparations within the football building and oversee the team on game day.

Saban said he has had a runny nose, but no major symptoms. He had previously received a false positive ahead of the game with Georgia but didn’t have any symptoms that time.

He was cleared to coach in the game after subsequent tests leading up to the game came back negative.

“It was a PCR test which was different than the false positive that I had before,” Saban said on the Southeastern Conference coaches teleconference. “I don’t really have any cardinal signs of the virus right now. I don’t have a fever, no loss of taste or smell, no fatigue, no muscle aches.

“I informed the team this morning at 10 on a zoom call. I’m the only person in the whole organization who tested positive this round.”

Saban will still run meetings and monitor practice via zoom at home like he did ahead of the Georgia game. Sarkisian will still call offensive plays during the game, but Saban said other details were still to be ironed out.

“Last time I did this for three days, I absolutely did everything from home that I did in the office,” Saban said. “I just did it on zoom.”

Saban said he has no idea how he got the virus, and it wasn’t immediately clear if anybody else within the program will be affected because of close contact. Saban believes that’s unlikely “based on how we manage things internally in the building.”

“I’m around nobody. I mean, I go home and I go to the office,” Saban said. “I have no idea. Now, there are some people in and out of our house on occasion, but I have no idea how this happened. We really practice social tracing, social distancing, all the things that we need to do to be safe.

Elsewhere, No. 7 Cincinnati’s game at Temple this weekend was canceled because both teams are dealing with COVID-19 issues.

The American Athletic Conference said the game scheduled for Saturday could not be made up on Dec. 5, even though both teams have an open date, because the league’s protocols “would not allow for a sufficient number of players to be available for competition on that day.”

The unbeaten and conference-leading Bearcats’ next game is scheduled for Dec. 12 at No. 24 Tulsa, which had its game scheduled for Saturday against Houston postponed because the Cougars have been hit by the virus.

Tulsa is also unbeaten in conference play and with a victory next week against Navy it would clinch a spot in the AAC championship against Cincinnati.

Cincinnati-Temple is the 11th game this week to be postponed or canceled across major college football.