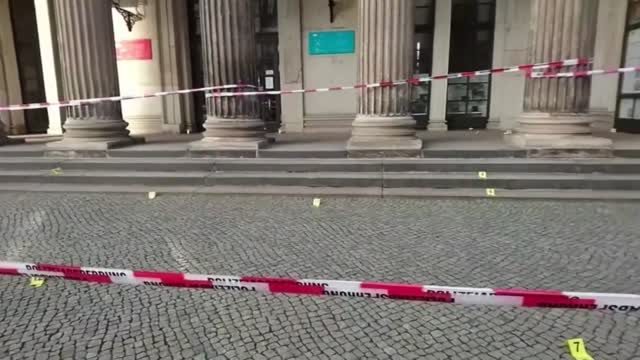 German police said Tuesday that they had three suspects in custody almost a year after what may have been the biggest jewel heist in history. Berlin's police force said two more people were still being hunted in connection with the brazen theft of an estimated $1 billion worth of treasure from a castle in the city of Dresden.

The suspects were charged with aggravated gang theft and arson, but there was still no sign of the loot, and fading hopes of getting it back.

They entered the castle through a window and, within a few minutes, they were gone with the historical jewelry from an exhibition display case. They fled in a car, which was later found burned out.

While initial estimates said the diamond-encrusted items were worth around $1 billion, Dresden State Art Collections director Marion Ackermann said the treasure had an "inestimable art and cultural historical value."

According to a spokesman for the Dresden police, the suspects in custody are German citizens with links to an Arab crime family, or clan, based in the German capital. Berlin's Senator of the Interior Andreas Geisel called the searches and arrests a great success and "a further signal to the clan scene."

The Arab clan implicated in the heist is well known to the police and has been accused of other major crimes, including the 2017 theft of a 220-pound gold coin from the Berlin Bode Museum.

More than 1,600 police officers, including special forces from the federal government and seven states, took part in the large-scale operation. According to the public prosecutor's office, a total of 18 properties in Berlin were searched, including 10 apartments, garages and vehicles.

The focus of the operation remains "the search for the stolen art treasures and possible evidence such as storage media, clothing and tools," Saxony state police said on Twitter.

"It is also our goal to search for the stolen jewels," said a spokesman for the Dresden public prosecutor's office.

But the investigators didn't voice much hope that the objects would be returned to Dresden.

"You would have to be very lucky to find them a year after the crime," said Thomas Geithner, spokesman for the Dresden police force, adding that "hope dies last."

Dresden's senior public prosecutor Jürgen Schmidt said the suspects were identified with the help of surveillance camera video from the crime scene and forensic evidence that clearly linked the men to the scene and vehicles used in the heist.