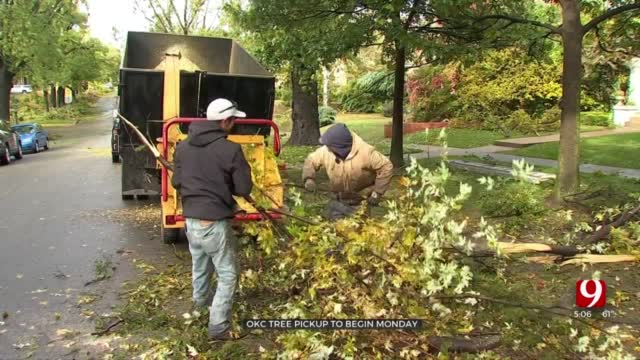 Starting next week, crews will be coming through neighborhoods collecting and removing trees after the historic October ice storm.

"There are hundreds and thousands in the city, and even though we have crews, it is still going to take a long time to get around to those homes," said Oklahoma City Mayor David Holt.

Holt said this free tree pickup provided by the city will take months to complete. The city will complete two passes to collect all of the limbs. The first round is scheduled to be done by January 30.

"Just leave them out on your front lawn with limbs no longer than 10 feet long, and they will be picked up eventually," Holt said.

"This is a massive event. This will probably debris pickup we have ever face in the city's history," Holt said.

With an estimated 100,000 tons of trees and limbs debris from the storm, this is about double the amount of waste collected each year by the city.

"I am going to wait for them to be picked up by the city," Holt said.

But there is an opportunity to remove trees and limbs before next week's start date.

"If you have the resources to do so, you are allowed to bring those limbs to our landfills for free," Holt said.

Each Saturday for the rest of the calendar year, four Oklahoma City landfills will allow you to bring your utility bill and expose the limbs for free.

The leaves that caused most of the trees to fall can be bagged up in a trash bag and put into your blue cart for weekly trash pickup.