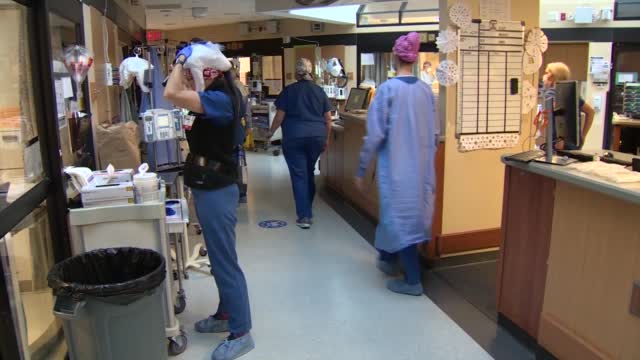 The United States recorded 121,888 new COVID-19 cases on Thursday, breaking the record for new daily coronavirus cases for a second straight day, according to Johns Hopkins University. The previous record was set when 102,000 new infections were recorded on Wednesday.

Hospitalizations have also soared, with at least 16 states breaking records as of Thursday evening. The U.S. also recorded 1,210 new deaths.

The U.S. has recorded the most infections in the world, with more than 9.6 million total cases and over 235,000 deaths due to the virus. More than 48.9 million cases have been reported globally.

As for the counties with the most infections, Los Angeles County is leading with 315,564 confirmed cases and 7,140 deaths. Next is Illinois' Cook County, where Chicago is located, which has recorded 204,977 confirmed cases. Miami-Dade County follows, with 190,728 confirmed cases.

According to Johns Hopkins' COVID-19 tracker, hotspots like Southern California and South Florida are currently recording the most new cases, while the Midwest is the area with the most new cases by population.

In Iowa, cases are soaring for the third time, prompting an urgent warning from Suresh Gunasekaran, chief executive officer of the University of Iowa Hospitals and Clinics. "We are again in danger of losing control of this pandemic in Iowa," Gunasekaran said in a statement this week addressed to his fellow Iowans. "Our COVID positivity rates skyrocketed twice before, but this is the first time we have seen rates this high while also dealing with record patient hospitalizations."

"Iowans have previously risen to the challenge to flatten the curve," the statement continued. "The question now, is whether Iowans can rise to the challenge a third time. Personally, I believe that we can. But it will require immediate behavior modification by each one of us."

He said hospitals may need to make changes like no longer allowing visitors and rescheduling non-emergency surgeries and procedures. He also urged citizens to make changes, like sacrificing celebrations Thanksgiving and weddings to help flatten the curve.

Wisconsin also got a stark warning about the rise in cases there. In a private memo obtained by CBS News, the White House Coronavirus Task Force warned the hard-hit state that it is "seeing an unrelenting rise in cases and test positivity over the last two months with an ongoing health emergency that will continue to lead to increasing hospitalizations and deaths."

"A more comprehensive mitigation strategy is needed," the memo reads.