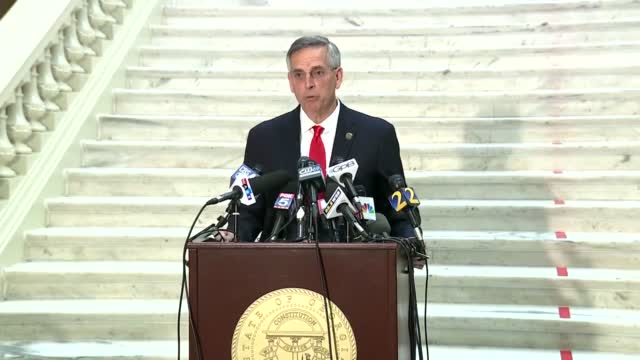 Georgia Secretary of State Brad Raffensberger told reporters on Friday that the state will likely head to a recount due the small margin between former Vice President Joe Biden and President Trump. Biden pulled ahead in the state by a narrow margin of just over 1,000 votes as of Friday morning.

"This process is and will remain open and transparent to monitors," Raffensberger said. Candidates must be within half a percentage point of each other to trigger a recount.

Gabriel Sterling, the state's Voting System Implementation Manager, told reporters that there are 4,169 outstanding ballots in the state. Sterling also emphasized that the count would be thorough and transparent.

"Everything's going to have to be investigated to protect the integrity of the vote," Sterling said. "We are literally looking at a margin of less than a large high school."

However, Sterling also pushed back against false claims that there was any ongoing fraud.

"We're not seeing any widespread irregularities," he said.

According to elections data from Georgia's Clayton County, which was part of the congressional district of the late civil rights icon John Lewis, Biden added 1,602 votes and Mr. Trump 223 as of early Friday morning..

CBS News projects Biden has so far secured 253 electoral votes — just 17 shy of the 270 needed to win the presidency. Mr. Trump has won 213.