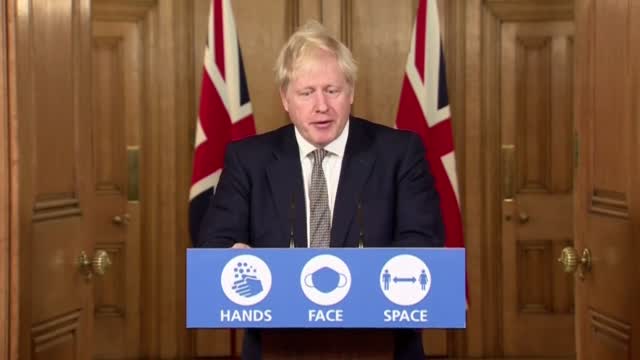 Prime Minister Boris Johnson on Monday defended his decision to impose a second national lockdown, brushing aside criticism that weeks of delay have meant thousands more infections and hundreds of needless deaths.

The comments came as Johnson gave the House of Commons details of the proposed four-week lockdown in England that is set to begin Thursday. The plan was hurriedly announced Saturday after updated projections showed that rapidly rising infection rates risked swamping hospitals in a matter of weeks.

The new policy comes three weeks after Johnson announced plans for a three-tiered regional approach to combating the virus, with tighter restrictions imposed on areas with higher infection rates. The government chose that strategy in an effort to reduce the economic and social impact of new restrictions, even though a committee of scientific advisers on Sept. 21 recommended a short lockdown as a “circuit breaker” to slow the spread of COVID-19.

But that approach became untenable after new analysis showed COVID-19 was spreading so rapidly that the number of deaths this winter could more than double those recorded earlier this year. The government needs to act now to prevent the National Health Service from being overwhelmed, Johnson said in the face of criticism from members of his own party who are concerned about the impact the restrictions will have on jobs and civil liberties.

Labour Party leader Keir Starmer said the cost of that delay was recorded in statistics of the pandemic. On Sept. 21 the U.K. recorded 11 deaths from COVID-19 and about 4,000 new infections. Forty days later, there were 326 deaths and more than 22,000 cases.

“At every stage, he’s over-promised and under-delivered,” Starmer said of Johnson’s COVID-19 strategy. “Rejecting the advice of his own scientists over 40 days was a catastrophic failure of leadership and of judgment.”

Despite his criticism, Starmer pledged to back the legislation that is expected to come up for a vote on Wednesday.

The U.K. has Europe’s deadliest outbreak of COVID-19, with 46,807 deaths recorded through Sunday.

Under the proposed lockdown, most shops will be closed until Dec. 2, with bars and restaurants restricted to takeout and delivery services. People will be ordered to stay home, except for work, exercise and essential shopping. Schools will remain open.

To cushion the economic impact of the lockdown, the government plans to extend its job furlough program, which covers 80% of the wages of workers whose employers are forced to close by the restrictions. The government on Monday said it would also double support for self-employed workers to 80% of their average trading profits for November. Critics have argued that this group didn’t receive enough help from earlier programs.

Under the U.K.’s system of devolved authority, the national governments in Northern Ireland, Scotland and Wales have already imposed tighter coronavirus restrictions than England.

Graham Brady, chairman of an influential committee of Conservative lawmakers, acknowledged the suffering caused by COVID-19 but said the government must also consider the impact that restrictions have on the economy and mental health. He also expressed concerns about restricting family life and freedom of association.

“If these kinds of measures were being taken in any totalitarian country around the world, we would be decrying it as a form of evil, and here the removal of people’s fundamental liberties is going almost without comment,” Brady told the BBC before Johnson spoke to lawmakers.