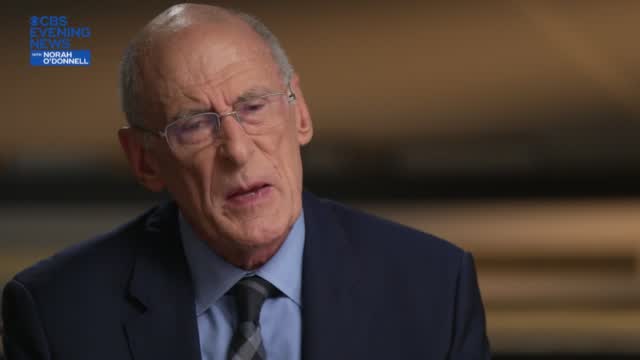 The threat of foreign interference in this campaign season has voters on edge. For some perspective on what's happening and what's at stake, "CBS Evening News" anchor Norah O'Donnell recently spoke to Dan Coats, a former Republican senator from Indiana who was President Trump's first Director of National Intelligence. In his first television interview since the president abruptly replaced him last July, Coats said, like many Americans, he's worried about what could happen on Election Day.

Norah O'Donnell: The president says, the only way he's gonna lose is if the election is rigged. He also keeps saying, "This will be the most corrupt election in American history." Is this going to be a corrupt election?

Coats: The president says things. He counter says them sometimes the next day. But I think if we adhere to the principles that are necessary for a legitimate election, and the American people understand that and demand that, I think that's where we'll end up.

O'Donnell: Have you seen any evidence of widespread fraud? Or anything that leads you to believe this will not be a fair election?

Coats: No, I haven't and the people I have talked to who are looking at this have basically said they have not seen this, at least at this point.

What the intelligence community has seen are efforts by China, Iran and other nations to disrupt Tuesday's election. But the country that concerns Coats the most is Russia, in what he's calling the Super Bowl of elections.

Coats: They're the New England Patriots of messing with elections. I think they do it better than anybody else.

O'Donnell: President Trump has continuously referred to Russian interference in our elections as a hoax. Are they a hoax?

Coats: I am absolutely clear that by the intelligence we have gathered that we have full confidence that the Russians are going after our elections. They're trying to undermine our confidence in Democracy. They're doing it now. They're gonna continue to do it, and the American people need to know that.

O'Donnell: The president's personal lawyer, Rudy Giuliani, has openly admitted to seeking information that could damage the Bidens. And one of his sources is someone who the U.S. government has said is an "active Russian agent." Isn't that a national security threat?

Coats: We need to get to the bottom of that, absolutely.

O'Donnell: What's your advice to the average voter, Democrat or Republican who's anxious, nervous about this election?

Coats: Let's stand up together and say, "I'm a Republican, I'm a Democrat, we're gonna stand together and at least do this." If we don't, Joe Biden and Donald Trump will not be the winners. Vladimir Putin and Xi Jinping and the Supreme Leader Ali Khamenei, they'll be laughing and saying, "We got 'em." We cannot let that happen.