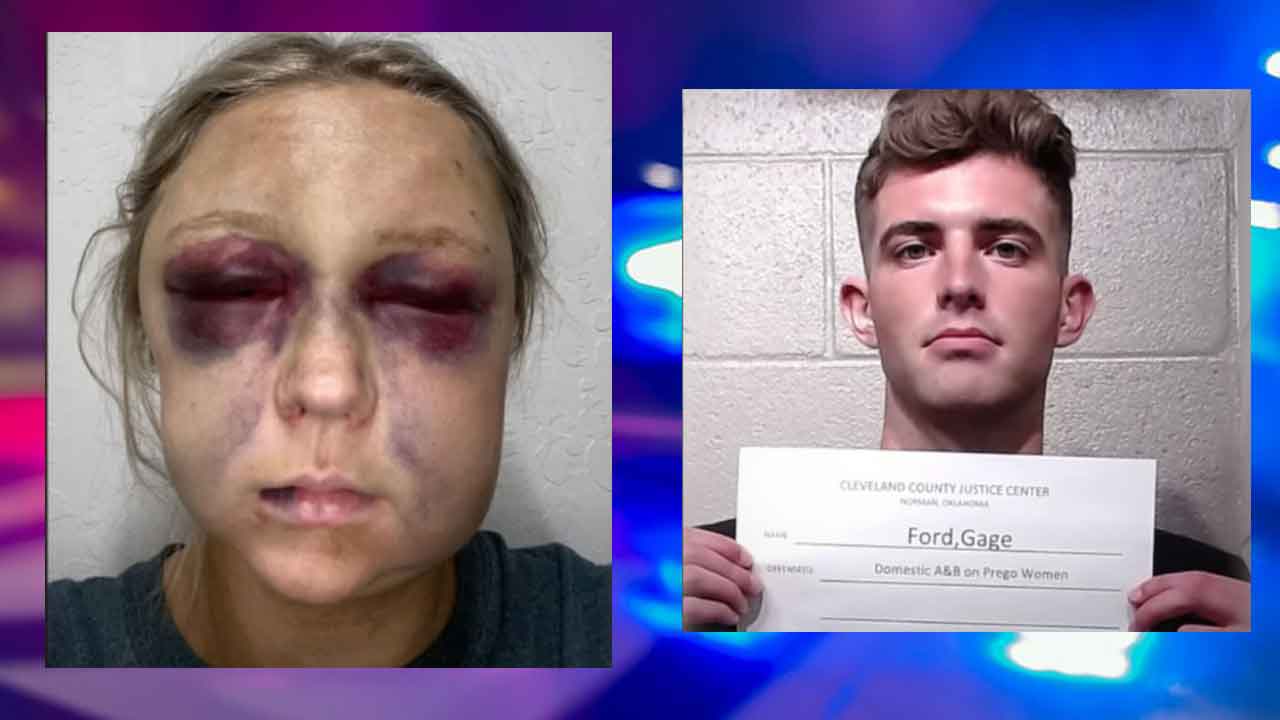 A Norman man was arrested, accused of beating up his pregnant girlfriend and allegedly trying to kill their unborn baby.

Investigators said Gage Ford was arrested in early October for the first attack but posted bail.

Less than a week ago, police said he attacked his girlfriend again, and has not been found.

The case began October 1 after the reported victim, 19-year-old Ally Stephens, walked into the Norman Police Department to report the abuse.

Investigators noted that Ford repeatedly kicked his girlfriend in the stomach and even told her to "get rid of it" reportedly referring to the baby.

Stephens said she was also choked by Ford.

Ford was arraigned, and while the Cleveland County district attorney’s office requested a $30,000 bond, Judge Scott Brockman issued a $1,500 bond.

Then, on October 17, Ally Stephens went to the hospital with severe injuries.

She recently filmed an update for News 9 from her couch with the following message:

District Attorney Greg Mashburn said Ford’s bond should have never been that low based on the initial allegations, and lethality report from Norman police that showed he threatened to kill the victim and tried to commit suicide.

“We have a victim who is beaten unrecognizable, and this didn't have to happen. We get in front of these judges, we ask them to listen to our victims and listen to us, and our judgement,” said Mashburn. “I have to do something for the victims, and I have to be able to tell them that I tried...I just can't say oh well the judge just decided not to do that when I see a pattern that puts people at risk.”

The DA said Brockman has shown a pattern of issuing or lowering suspects bonds.

“What he has stated in open court is that he doesn’t believe people should be held on bond prior to being convicted,” said Mashburn.

As for Stephens, she said she is sharing her story to help others find their way out of abuse.

“You can't save them. Don't ever ignore the signs. There is always help out there that you can go to. You can call anyone, and they will help you, and stay strong,” said Stephens.

Ford is charged with domestic abuse of a pregnant woman. Mashburn said the charges could be upgraded in the coming days.

News 9 reached out to Brockman for comment and those messages went unreturned.

Ford had a court hearing Friday morning and is now being held on a $250,000 bond.

He turned himself in after US Marshals were looking for him over the past week.