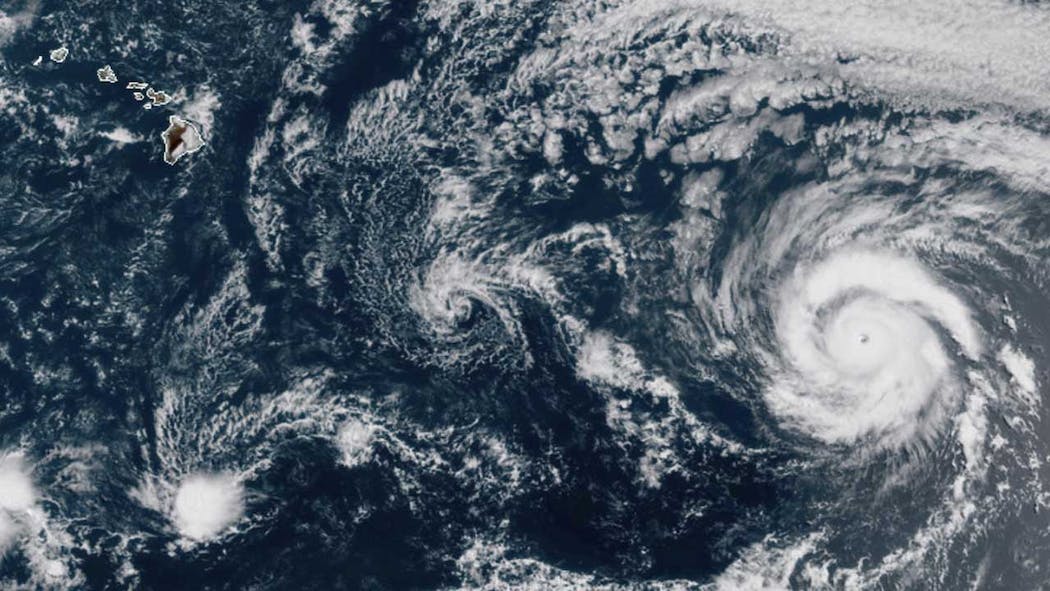 The first hurricane to threaten the United States since the start of the coronavirus pandemic is bearing down on Hawaii. Meanwhile, two storms are churning in the Atlantic and one could cause significant flooding in the Gulf Coast.

Late Thursday, in the Pacific, Hurricane Douglas was 1,025 miles southeast of Hilo, Hawaii, and packing maximum sustained winds of 130 mph. It's expected to weaken as it passes over cooler water but meteorologists warn strong winds, heavy rainfall and dangerous surf could afflict the entire state beginning on Sunday.

The storm approaches as Hawaii is grappling with increasing COVID-19 numbers. On Thursday, the state reported 55 newly confirmed cases, its highest single-day increase since the pandemic began.

Unlike other hurricane-prone states like Florida where residents pile into cars to evacuate when storms approach, it's impractical to leave Hawaii to get away from a storm. Shelter space is also limited.

So, as is typical, local authorities are urging most people to shelter at home if they can. Those living in homes built according to code after 1995 should be "pretty good to go," said John Cummings, the public information office for Honolulu Emergency Management.

He recommended staying with friends and family if home isn't safe. Seek refuge in an interior room, he said. Going to a city-run shelter should be a last resort, he added.

Meanwhile in the Atlantic, Tropical Storm Hanna was expected to strengthen Friday as it moves toward the Texas coastline, threatening to bring heavy rain, rough waters and strong winds to the Corpus Christi area — all while another tropical storm continued to approach the Caribbean.

Hanna was located about 315 miles east-southeast of Corpus Christi, Texas, the National Hurricane Center said in its 4 a.m. CDT advisory. It had maximum sustained winds around 40 mph and was moving west-northwest at 9 mph.

"The big threat here is rain and flash flooding," Parkinson said. "Texas does need storms like this to prevent recurring droughts but that doesn't mean there won't be isolated pockets of bad flooding."

Forecasters increased the expected rainfall totals in its update, stating that Hanna could bring 4 to 8 inches of rain and coastal swells that "are likely to cause life-threatening surf and rip current conditions," the advisory stated.

Tropical Storm Gonzalo was also the earliest Atlantic named storm for its place in the alphabet. The previous record was held by Tropical Storm Gert, which formed on July 24, 2005. So far this year, Cristobal, Danielle, Edouard and Fay also set records for being the earliest named Atlantic storm for their alphabetic order.

Gonzalo was moving 14 mph with maximum sustained winds of 60 mph, according to the National Hurricane Center's Friday morning update. It was located about 645 miles east of the southern Windward Islands.

The Hurricane Center said that those in the Windward Islands should monitor the storm as it is expected to approach the islands late Friday and Saturday. As some strengthening is forecast, there is still a chance that Gonzalo could become a hurricane, but the storm is expected to weaken as it moves into the Caribbean Sea.

A hurricane watch has been issued for Barbados and St. Vincent and the Grenadines. A tropical storm warning is in effect for several places, including St. Lucia, Tobago and Grenada. Forecasters said Gonzalo could bring 2 to 5 inches of rain.

CBS News President Trump changed his rhetoric on wearing masks in a press conference Tuesday, saying that "they have an impact." Mr. Trump's comments came as dozens of states and the District of Columbia experience a rise in coronavirus infections.

Oklahomans To See Rain, Storm Chances Throughout The Day