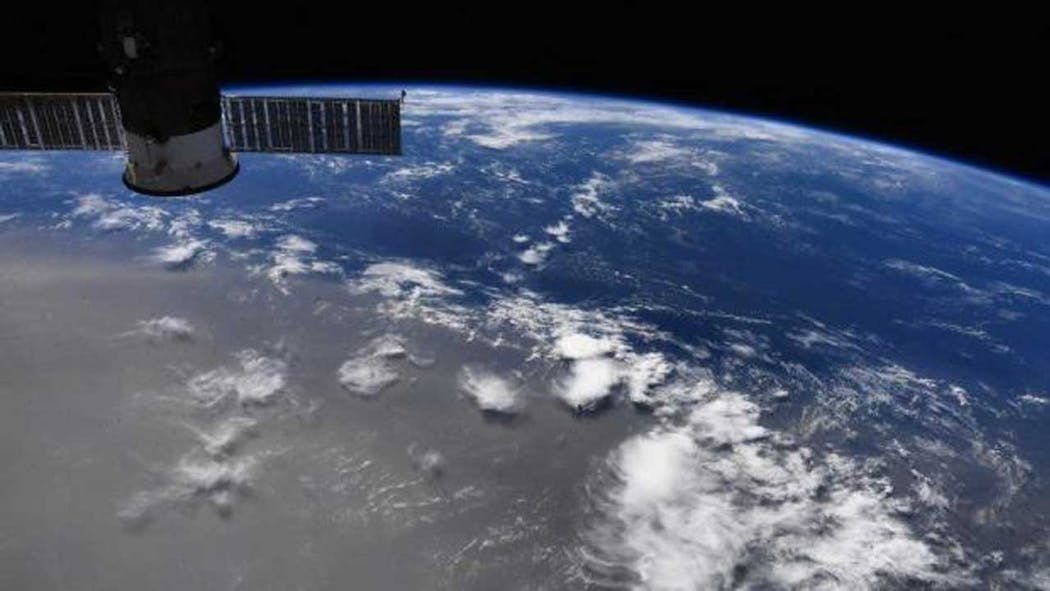 Each summer massive plumes of dust traverse the atmosphere above the tropical Atlantic Ocean, traveling 5,000 miles from the Sahara desert in northern Africa all the way to the southern United States.

While summer dust plumes are a common occurrence, the one sailing through the Caribbean right now is generating quite the buzz. That's because it appears to be one of the most extreme in recent memory and it's heading for the southeastern states.

On satellite images from space, dust typically appears somewhat subtle and faint, but this plume can be seen as clear as day. The picture below was taken on Sunday from the International Space Station. "We flew over this Saharan dust plume today in the west central Atlantic. Amazing how large an area it covers!" astronaut Doug Hurley tweeted.

These plumes of Saharan dust, termed Saharan Air Layer (SAL) by meteorologists, are whipped up by strong wind storms crossing the Sahara desert. The dust enters the Atlantic Ocean near the Cape Verde islands, inside the Intertropical Convergence Zone where tropical systems often get their start.

NOAA's GOES satellite captured this series of animating images on Friday as the dust entered the deep tropical Atlantic from Africa.

The dust hitches a ride along the trade winds, a belt of east-to-west moving winds near the equator which become firmly established during summertime. The dust layer can extend from a few thousand feet above the surface to 20,000 feet up.

While the dust masses often stay generally intact during most of the trans-Atlantic journey, they typically become diffuse and diluted by the time they reach the Caribbean. However, so far, this particular dust layer is defying the odds.

Here are a series of before and after photos taken Sunday on Caribbean islands like Antigua, St. Barts, Puerto Rico and Trindad and Tabago:

The dust is so thick that the Barbados Meteorological Services issued a "Severe Dust Haze Warning" urging residents to take action due significantly reduced visibility and potential respiratory problems for people who experience difficulty breathing.

As you can see, when the dust is thick, it makes for very hazy yellow-brown skies. But when the dust is rather faint, the refraction and reflection of light can contribute to stunning sunrises and sunsets, which may help to at least partially explain Sunday's sunset in Miami.

Over the next few days the thickest of the dust layer will stay south of Florida, over Cuba. By late this week it will overspread Texas and the rest of the Southeast, making for hazy skies and colorful sunrises and sunsets.

For most people the dust is merely a nuisance, making for hazy skies and often leaving a dirty film on cars as it falls out of the air. But for people with preexisting respiratory ailments, it can trigger breathing difficulty.

The dust is most commonly known to be a hurricane killer. Anyone who has lived in Hurricane Alley can tell you that these dry, dusty layers subdue the moisture needed to feed the hurricane engine. Typically when thick dust layers are around, tropical activity remains quiet, and that is what is expected over the next week.

Surprisingly, much of the soil, and nutrients in the soil, in places like South Florida and the Caribbean are composed of African dust which has settled over millions of years. Studies show that nutrients from African dust in subtropical and tropical soils may be critical to sustaining vegetation.

For the oceans it can be both a blessing and a curse. Scientists theorize that the nutrients transported from the Sahara desert have helped to build and nourish coral reefs in the Caribbean, Bahamas and Florida for millions of years. Without those minerals, they say, the area around the Bahamas is just too nutrient-poor to support the vibrant reefs that exist.

On the flip side, during years of severe dust storms, coral seems to suffer or even die off. One theory is that contaminants mixed in with the dust from agricultural practices in the Sahel region of Africa may be contributing. Also, too many minerals in the dust can cause hyper-fertilization, contributing to algae blooms that are harmful to coral.

In addition, the dust may also be contributing to warming our atmosphere. In a study published in this April, researchers found that scientific climate models currently underestimate the amount of coarse dust in our atmosphere by four times. That's because the models deposit the dust out of the atmosphere too quickly. The dust, they say, appears to have a net warming influence on our atmosphere.

But in the more immediate future, the biggest concern is how pervasive the dust layer will be in the tropical Atlantic this summer. With all signs pointing to a very active hurricane season, a more persistent dust layer could help defend against tropical activity. However, once the dust begins to settle, it appears there won't be much standing in the way of a busy hurricane season.

News 9 Okla. To See Dangerous Heat Index With Temperatures In Some Areas Climbing To 110

News 9 Okla. To See Dangerous Heat Index With Temperatures In Some Areas Climbing To 110

Lacey Swope The heat is on! Highs Monday will climb into the 90s and low 100s.
View More Stories