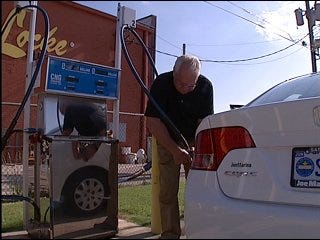 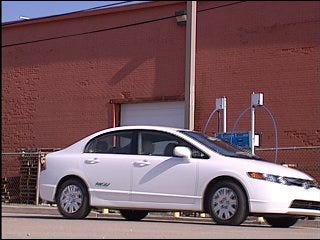 As gas prices continue to break records, some people have stopped wondering when they'll go down and are instead looking to the future.

Ross Little isn't setting out to change the world, but he is a pioneer of sorts. Little's car, a Honda Civic, isn't powered by regular gasoline. Instead, it relies on compressed natural gas.

"I drive it whenever I have the chance," Little said. "I think it's the thing of the future."

While Little can't control the future price of gasoline, he thought he could beat it's rising cost when he purchased a 2008 Honda Civic GX.

"I wanted to stay one step ahead of the prices," Little said. "When I first looked at it, gasoline was just below three dollars a gallon."

With gas prices increasing, Little bought one of the first natural gas cars sold in Oklahoma and just 2 months on the road Ross saves money every time he stops for fuel.

Natural gas is less than a dollar a gallon, while most people keep paying almost $4 a gallon for gasoline.

Natural gas cars burn cleaner than regular gas, so there's no carbon build up in the engine which means fewer oil changes, less service visits, and more money in the pocket of the car's owner.