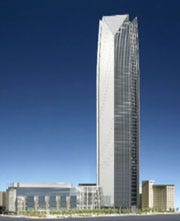 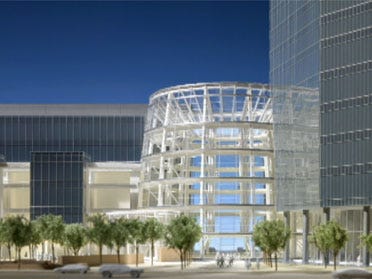 At 925 feet, the Devon Tower will stand almost twice the as tall as the city's current tallest building, the Chase tower. It will become the twenty-first tallest building in the country, but there's much more to this building than its height.

Devon and their architects presented plans for the new headquarters to the Oklahoma City Urban Renewal Authority Wednesday morning, needing and getting their approval to redevelop the site.

The proposed site is on Sheridan Avenue just west of the Colcord and across from the Myriad Gardens, currently home to a parking lot. Devon officials said they expect to start moving into their new home late in 2012.

"Once we realized that we needed 1.9 million square feet, we knew the building would be a big building. It's hard to hide that much space," Nichols said.

Nichols said the primary goal is to accommodate the company's needs, but what's almost as important is building a building that contributes to the growing vitality of downtown.

"We absolutely did not want a corporate building that was sort of walled off from the rest of the community," Nichols said. "We wanted a building that would embrace the city, that would have lots of public features."

The plans include a beautiful park, a central rotunda and there will be a six story podium-type structure, and of course the tower, which the architect sees as a beacon.

"I use the word beacon because I want it to radiate, so that no matter where you are in the city, you see it. It's a marker," Project architect Jon Pickard said.

"It's going to affirm, I think, the story we have been trying to tell people, that there's something going on here that's really unique and that this is one of the cities of the future," said Roy Williams, who works for the OKC Chamber of Commerce.