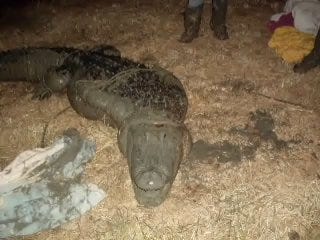 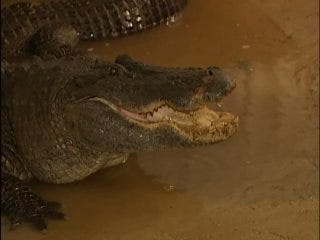 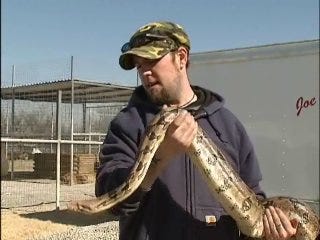 WYNNEWOOD, Oklahoma -- An 800 pound alligator that appeared in movies alongside Arnold Schwarzenegger and Mel Gibson was adopted Thursday by an exotic animal park.

Albert the alligator has made cameo appearances in commercials and movies, including Eraser and Lake Placid.

Albert belonged to Hughes County man Richard Beamon, who died recently in a chainsaw accident. Having left no one to tend to Albert, the 12-foot gator spent his days in his pond on Beamon's property.

"We finally found him, located him and put a noose on him," said John Reinke of GW Exotic Animal Park. "It took us a couple of hours to get him out of the water. We finally managed to get it done."

They unloaded Albert the alligator Thursday morning and introduced him to his new home in Wynnewood. The GW crew also recovered several snakes from Beamon's residence, including a boa constrictor, a native of Mexico or north Columbia.

The GW Exotic Animal Park plans to enlarge the area set aside for Albert the alligator when he goes on display to the public.

Visit Albert the alligator, the new boa constrictor and other rescued animals at the GW Exotic Animal Park 7 days a week.