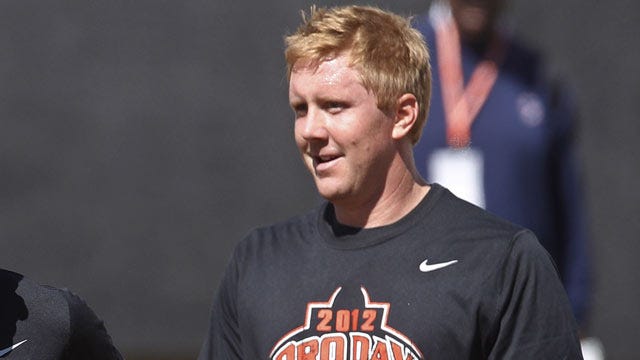 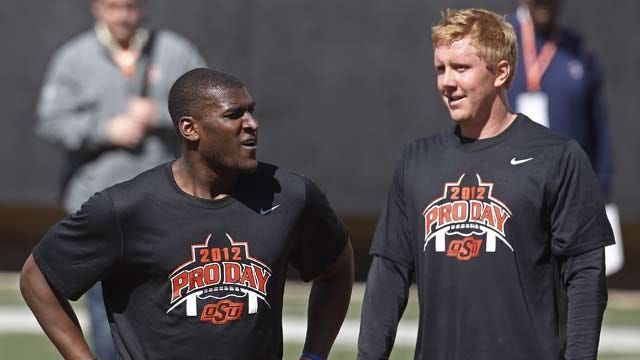 The 2012 NFL Draft is just days away and even thought it's a huge week in football, former Cowboy QB Brandon Weeden took a time out for a short question and answer session.

Weeden is one of the most talked-about quarterback prospects this year and with that comes a lot of conversations and analyzing by draft analysts across the country. This is what Weeden himself had to say this week:

On his plans for the last few days before the draft:

"I'm flying out to New York City Tuesday morning. There are some NFL Draft festivities going on out there that I'm going to take part in Tuesday and Wednesday night. I'll go and have some fun out there with some of the guys, then I'll fly home Thursday morning and spend the draft with my family and a few friends in Edmond."

On the whirlwind leading up to the draft:

"It's like a big rollercoaster. It's a fun process. There are so many moving parts. It starts with training – you've got to get ready for the Senior Bowl, then the Combine, then Pro Day. You've got business where you've got to talk with teams. It's so in-depth and there's so much that goes into it. It's a fun process. I've enjoyed every minute of it, but I'm excited for it to be over and finally find out where I'm going to land and start a new chapter in my life."

On the best advice he's gotten leading up to the draft:

"The tape is already done. What you did during the season – you can't change that. That's the majority of what teams look at. Whichever team drafts you, you just have to go out and compete and do whatever it takes to get on the field. A lot of teams have said that, but there's still some anxiety attached to the process because of course it's easier said than done."

On the people who doubt him because of his age and what motivates him:

"I just want to prove those people wrong. At this point, I hear what they're saying and I just have to sit back and take it. Once I find out what team takes me in the draft, then it's on my shoulders to go out and continue to get better as a player and to learn. When I finally get my shot, I'll do whatever it takes to win football games. It's frustrating to have people ask you that all the time. It's getting old, but I can't control it."

On how he will be remembered at Oklahoma State:

"Hopefully and most importantly as a good person and as a guy who was a good ambassador for the program and for the university. I took a lot of pride in being that guy. Hopefully I left a positive impression on a lot of people that are Oklahoma State fans and along the way, was able to make some plays on the field and win a championship. I take a lot of pride in being part of a team that was able to win a championship."

On how the talent level at Oklahoma State increased the last few years:

"It's like night and day. We had some good athletes when I first got here – don't get me wrong – but top to bottom, in terms of depth, we're as deep as we've ever been."

On who he thinks could be breakthrough players for Oklahoma State in 2012:

"Tracy Moore has a chance to have a big year this year. Obviously, we have two great backs in Jeremy Smith and Joseph Randle and then Herschel Sims as well. We've got a lot of pieces. Josh Stewart has a chance to have a big year and Charlie Moore had a great spring game. If he continues to learn, he'll be a guy. It's an exciting time. Without seeing much spring practice, it's hard for me to say who is going to step up, but our coaches will put them in position to make plays."

On his advice for the current Oklahoma State quarterbacks:

"Just continue to lead the team but don't put too much pressure on yourself. It's fun being the quarterback at Oklahoma State – you've got to remember that. You've got to enjoy it and rally your guys around you and be a team player. Do whatever you can both on the field and off the field to make the team better and always represent yourself and the program with class."

On his advice to the quarterbacks in working with Todd Monken:

"Just have a relationship with him where you can walk in his office at all times. I felt like at any time, his door was open and I could come in and talk about plays or if I didn't like something. The open-door policy was there. He was a great coach and I learned a ton from him during our time together. He's there for those guys and will do whatever he can to make them better players and better people. They should just have a good relationship with him and let it all soak in."

On how he would describe Todd Monken:

On the biggest influences on him during his time at Oklahoma State:

"Coach Monken. Dana Holgorsen – when he came in my junior year, he taught me how to play the position a little bit. He gave all of us a taste of success and how to prepare. Coach Gundy – our relationship really took a step these past couple years. We have a great relationship and he's been a huge help for me. He's always been there if I needed something. That says a lot for the coach of a top-five team in the country. It shows the kind of person he is."

On what makes Mike Gundy effective as a leader:

"He leads the team like we are all his own kids. He does everything he can to make the players feel comfortable and puts them in the right positions to succeed. He bleeds Orange. He loves Oklahoma State – he played there – and he has a strong passion for the school. Players respond to him because he's a player's coach. The players trust him because he tells it how he feels and he always backs up what he says."

On what he will remember about his time at Oklahoma State besides football:

"I've always been a big fan of Stillwater. There's a small-town feel. It's a college town and everybody is behind the football program. The support we have year-round is remarkable. I love Oklahoma State and I love the city of Stillwater. It's a great place to go to school – we have some of the most passionate fans in the country and my five years at OSU were special. I'll never forget them."