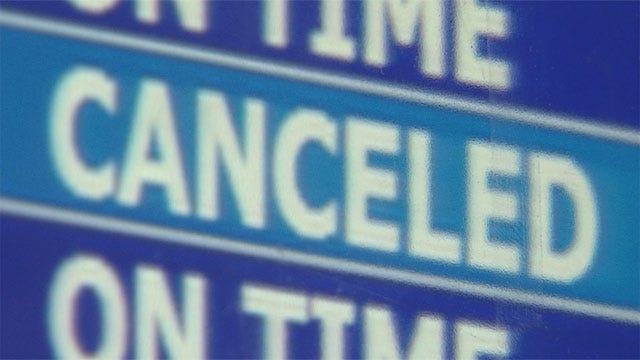 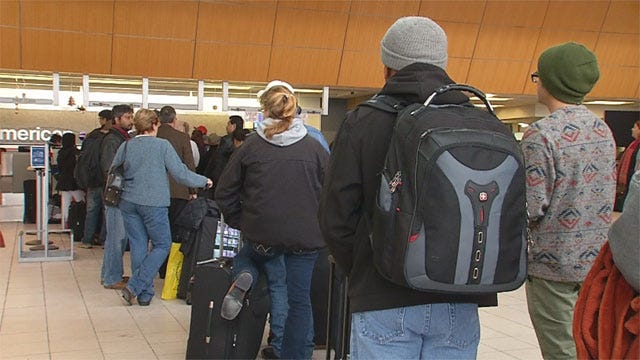 The weekend snow and ice storm snarled travel plans for hundreds of travelers at Will Rogers World Airport who had planned to fly through Dallas.

Flights to and from Dallas were canceled or delayed because of the weather. The delays frustrated travelers flying out of Oklahoma City.

"It's going to be a long day," said Christy Burch. She was delayed on her way to Crawford, Colorado. "I should've gotten home at like noon Colorado time, but it might be like midnight."

Snow and ice shut down several runways at Dallas/Fort Worth International Airport, derailing travel for many.

"I'm used to snow being from Colorado, so to see how this has a crippling effect on southern states, it's kind of funny."

Upset travelers waited and waited, hoping to hear good news that their flight plans were back on schedule.

Taylor Catlin expected to be in Orange County, California, by early Sunday afternoon, but the snow kept him from being home.

"I'm not used to it. Well, it's the first time I've seen snowfall ever," Catlin said.

"I want them to find me a flight into any city. I don't have to go through Dallas, just book me a flight somewhere and get me going."

Will Rogers Airport officials say there aren't any weather-related issues at the airport and all runways remain open.

DFW had only three runways open, 450 canceled flights and close to 2,000 people slept in the airport's terminals Saturday night.