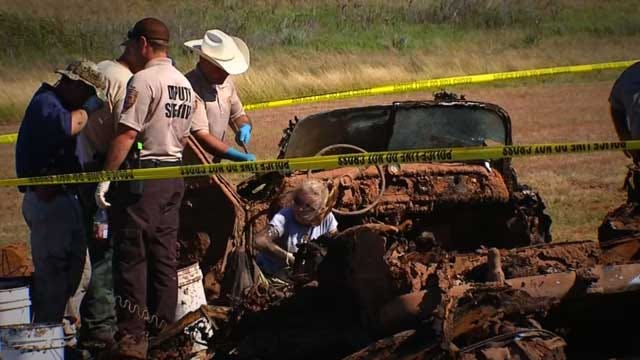 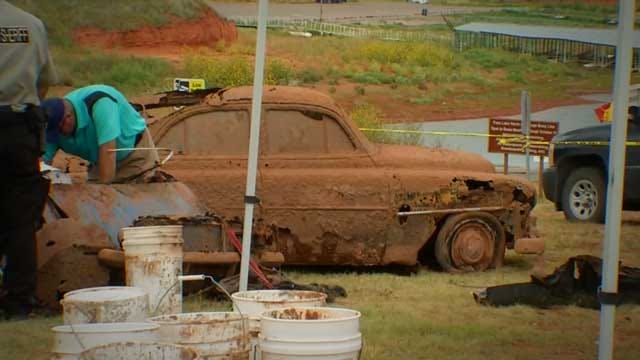 It happened in September of 2013 with the discovery of six people linked to two separate cold cases, people who had missing for more than 40 years. The mystery of why they ended up at the bottom of a Western Oklahoma lake remains.

"This was the way it was in 1970," said Park Manager Barry Hardaway about the boat ramp and dock area of Foss Lake in Custer County.

"The first one that came into the screen was the Camaro," said Trooper George Hoyle, OHP. "The next was a 53 Chevy."

A 1969 Chevrolet Camaro and a 1953 Chevrolet were pulled from the lake. Each contained three sets of skeletal human remains.

"I was very suspicious that we might have unearthed somebody's place they'd been hiding bodies," Trooper Hoyle said. "Whenever you think of six bodies in the water all together, the very first thing you think of is foul play."

In the 1969 Camaro, troopers found three teenagers, Jimmy Williams, Leah Johnson and Michael Rios. The teenagers disappeared from Sayre more than 40 years ago on November 20, 1970. Trooper Hoyle said several theories about their disappearance evolved through the years.

Days turned into weeks and into years, without a trace of the teenagers. Gary Williams was 12 years old when his brother, Jimmy, went missing. He said Jimmy's disappearance always haunted his family.

"My mom was talking about it on her death bed, every time Jimmy's birthday would come around, she'd bake a cake, you know 'maybe today is the day Jimmy comes home,'" Williams said. "It never leaves you. I guess there comes a point in time that you run out of options, but you're always looking anyway."

Williams said his parents passed away never knowing what happened to Jimmy. Like the Williams family, Debbie Porter McManaman's family had always wondered what happened. McManaman's grandfather, 69-year-old John Alva Porter, was found along with his friends Nora Duncan and Cleburne Hammack. The three were reported missing a little over a year before the teens -- in April of 1969.

"I got out of the car and stood on the sidewalk and stood there and he smiled at us and that was the last day we saw him," McManaman said. "There was no trace at all, I mean, my grandpa just left his house, Cleborn left his job, Nora left her home, and they were gone."

The discovery of their loved ones gave the families closure, but at the same time, left many questions unanswered.

"I think out of those six people, there would have been at least one person among the six would have got out," Williams said.

The investigation revealed the windows in both cars were rolled up except on the Camaro's driver's side, which was rolled down about four inches. Due to the significant damage to the undercarriage of the Camaro, Hoyle believes it crashed into the water.

"You have three young kids in a muscle car, alcohol in the vehicle," Hoyle said. "Probably just ran off the road and drowned."

However, Williams isn't convinced his brother simply drove off into the lake.

"I don't think it was an accident," Williams said. "Jimmy is not going to sit there in the driver's seat and accept death by drowning, without trying to kick a window out."

Williams believes his brother's car rolled into the lake backwards.

"It was found in the lake backwards with the car in neutral," Williams said. "All the damage to the vehicle, every bit of the damage can be attributed to a backwards roll in, it can be explained, but there is some damage on the vehicle that can't be explained with a forward impact, not very well anyway. Jimmy would have had to turn completely around, if you buy into the forward impact theory."

Trooper Hoyle agrees there are some things they can't answer, but says there was no evidence of foul play.

"The facts are the facts, I can't change those," he said. "A lot of things there that we probably don't know because we didn't see it actually happen, but we look and see what is most probable."

As for the 53 Chevy, Hoyle said there are even more unanswered questions.

"The driver's side door was open on the old Chevy, which was kind of a mystery all in itself," Hoyle said. "A whole lot of things there that we're really not able to determine.

Like the Camaro, evidence of alcohol was found inside the Chevy, but no damage to the vehicle.

"We always felt like foul play," says McManaman. "That hasn't been completely ruled out of our hearts."

The medical examiner's report ruled all deaths an accident due to probable drowning. A determination that is still unsettling for Williams.

Last year's discovery officially closed all six missing person's cases. However, the discovery did prompt OHP to search other Oklahoma lakes with their sonar equipment. So, far, nothing as significant as Foss Lake has been uncovered.

The medical examiner's office released the final reports, which included the contents pulled from both vehicles

Items found in the Camaro include:

1) A brown glass bottle, with "No deposit" embossed on bottom edge

2) A clear glass bottle, with "No deposit, No return" on the middle, and metal screw cap in place with the logo "TwistoTop Dr. Pepper "

13) Multiple, rusted objects with blue paint (from the car body)

17) Four 30m round plastic items (from the roll-up window handles?)

21) A black plastic hook from car

BOY, 713 71E PNT,IC J250,General Motors Corporation certifies to the dealer that this vehicle conforms to all U.S. Federal motor vehicle safety standards applicable at the time of manufacture"

30) A circular metal rivet with the logo "Maverick®"

33) Plastic fragments consistent with the shoe of OCME1304167

39) Fragments of elastic with fabric

40) Fragments of narrow leather with side stiches (possibly a belt)

Items found in the older model Chevy include:

1) A green identification plate, obliterated on the right side, with the words on the right of- Chevrolet, General Motors, correspondence, must bear t--' Style No, Body No, Trim No, Paint, Top (100mm x

2) Ronson ® flints ("Five-Fiinter, Made in USA" and "Ronson Flints, Best for every light, Extra length")

5) A black plastic flashlight ("Eveready Trademark, Made in USA, Union Carbide") (the weight suggests batteries within the flashlight)

8) A green plastic ice scraper ("Mistletoe Express Service, serving_ cities in Oklahoma,69 in Kansas-15 in Arkansas and 5 cities in Missouri")

27) A rusted key in the ignition, which is on a keychain of multiple rusted keys

29) The grip and partial shaft of a fishing pole

Associated Press The Supreme Court said Tuesday that Justice Ruth Bader Ginsburg has been admitted to the hospital for treatment of a possible infection and will stay in the hospital for a few days following a medical procedure.
View More Stories