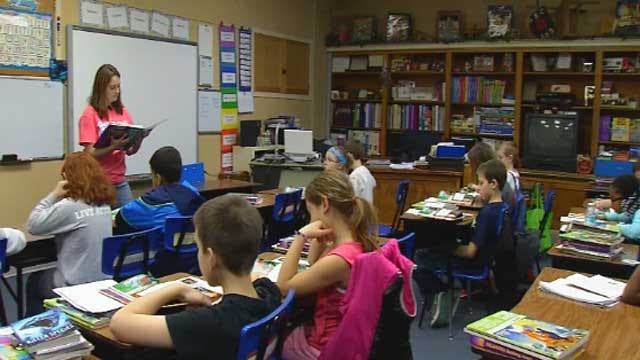 Educators have been preparing for it all school year long, and in three more months, it will be time to take the third grade reading test. To ensure more students aren't kept back if they don't pass, Lawmakers created new legislation to strengthen the process.

Senator Ron Sharp (R-Shawnee) filed a bill Thursday to modify Oklahoma's Reading Sufficiency Act. The law would make a team, including parents and teachers, a permanent deciding component for if a student should move on or not to the fourth grade.

It's not easy being a third-grader or a third grade teacher.

“It is very stressful for the kids, parents and the teachers, we all want the students to succeed,” said third-grade teacher Caria Kennedy.

“Because if they don't pass it, that one or two days, then they fail third grade, and that is so sad to put that much stress on the third graders all year long."

Kennedy is in her16th year teaching third grade at Shawnee's Jefferson Elementary School, and although all her students passed last year's state reading test, 13 children at the school did not.

So the heat is on for this April's exam.

"We're teaching the test format, going over passages and questions that deal with multiple choice."

Ten children who did not pass at the school were able to move on to fourth grade, thanks to a committee made up of parents, the teacher, reading specialists and administrators. The committee plan is only in place for two years under the current law.

State Senator Ron Sharp said the Student Reading Proficiency Team is already paying off and wants the committee to be permanent.

“We should not have a state department of education and education system that absolutely says this is what's going to happen to your child, the parent should make the final determination, every child develops at their own pace,” Sharp said.

“I think that was missing in the original act, and this gives the parent options."

Jefferson principal Vickie Penson is on her school's committee, which had to decide which students would to the next grade level. She believes the team of parents and educators are critical to the final decision.

"I'm really happy that Sen. Sharp decided that he wanted to make that a permanent option, so we're pulling for it," Penson said.

The bill also allows for students, who don't pass to be in an 80-hour summer reading institute, where the test would be really administered at the end of the course. If the student did not pass, a multi-membered committee would still decide if the child should be retained.

"I think the most important thing to remember is that they are just 8 and 9 -year-old kids, and that a test is hard to determine where they need to be, but the parent and the teacher can do that," Kennedy said.

The bill will be heard next month in the Education Committee, of which Sen. Sharp is the vice chair. Rep. Jon Echols (R-Oklahoma City) serves as the house author.

The state reports last year 2,527 third graders out of 45,101 in the state did not pass the third-grade reading tests.