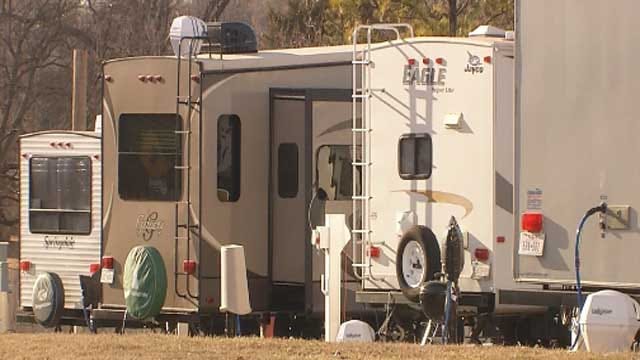 You could call it a bizarre break-in.

A Chickasha man woke up to find police telling him someone broke into his home. What they said happened during the crime is just strange.

The story started out at the Pecan Grove RV Resort Lot Number 39. That's where police said Leigh Ann Perkins showed up and had had a little too much to drink.

Perkins lives across the street and stumbled over to the resort.

The man who stays on Lot 39 called police after he said Perkins was banging on his window. Police showed up, and by that time, Perkins had moved over to lot 40.

Perkins went inside that RV, unknown to the person who was asleep inside the trailer.

The officer approached Perkins, and reportedly said he "heard what sounded like a pill bottle with pills rattling in one of her pockets."

That's when the officer awakened the person inside the RV parked in lot 40, who had no idea Perkins had paid him a little visit.

He looked around and told the officer his "blood pressure medication was missing" and that "a cigarette was missing out of his pack.” To top it off, he said somebody drank some of his Crown Royal liquor.

But it was a can of diet Dr. Pepper that was the key piece of evidence somebody was there, because this resident told police "he does not drink diet Dr. Pepper” and “did not keep it in the RV."

That Diet Dr. Pepper can was seized for evidence.

Perkins was also taken away to the Grady County Jail for first degree burglary and public intoxication.

News 9 went to Perkins' home, but she wasn't there and was most likely still in jail. News 9 was kicked off the property of the Pecan Grove RV Resort.

Some of the information in the news story may have been provided by law enforcement with the request News 9 inform the public of, and/or assist in locating a person in connection with, a police investigation. News 9 can make no independent verification of the accuracy of the information, photographs and/or video provided to it by police or other law enforcement agencies.