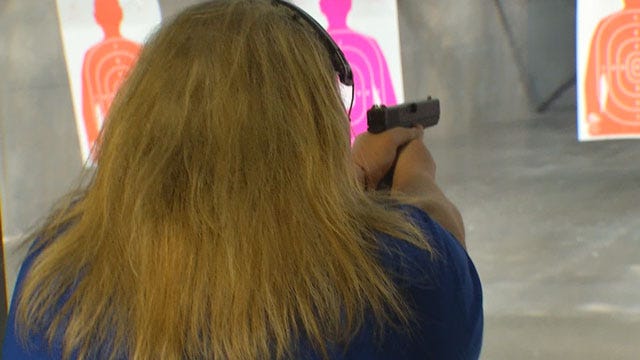 A loophole in Oklahoma law allows you to get a handgun license in another state without ever firing a practice shot.

Oklahoma honors an out-of-state concealed carry licenses. One lawmaker said he hopes tightening the loophole will encourage you to get that license at a facility.

People have been going online and applying for gun licenses in states like Virginia for quite some time, which only requires applicants to take an online quiz and pass a background check.

Oklahoma law, requires that you take live firearm training with a licensed instructor.

“I think if Oklahoma provides an online course where they can get their Oklahoma license, I think it will slow down the people going out of state to get their license,” said Rep. Casey Murdock, R- District 51.

Freshman Representative Casey Murdock said he wants to close a loophole and provide Oklahomans with what he calls a more convenient way to become a licensed gun carrier.

“I want to put the tools in Oklahomans hands to protect themselves,” said Murdock.

Murdock said under his proposal, you would still be required to go through the shooting portion of the training with an instructor. But, for the first time you would be able to bypass in-class instruction.

“The one problem with this system now, is it's way too inconvenient, which is why people are going out of state,” said Don Spencer, Vice President of the Oklahoma Second Amendment Association.

“If it's cheaper here, it's a bargain here. You get it here, and competition answers the problem,” said Spencer.

And there are several websites offering online training courses, some as low as $20.

You can watch a short video, take a true-false test, turn in a background check, and you're sent a handgun license.

Big Boys Guns and Ammo Fire arms instructor Angie Houch said she thinks this is more about money than safety.

“You need someone that can come in and kind of interpret exactly what they're trying to say as far as what you can and cannot do,” said Houck.

“I just want to protect Oklahomans from getting trouble,” said Murdock.

Several bills have been filed this session that would give gun carriers more freedom when it comes to where and how guns are carried.