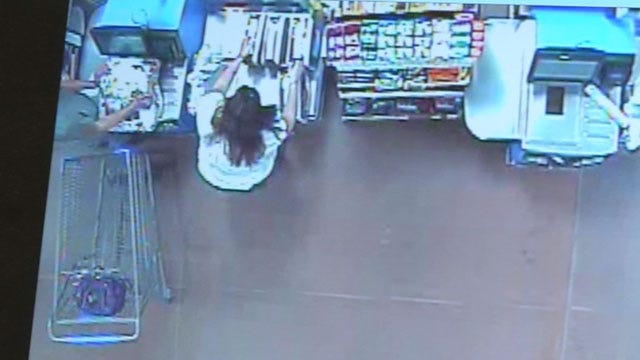 An illegal shopping spree got costly at the expense of an area mother after someone swiped one of her credit cards and started spending, but the suspect left a trail of evidence in her wake.

Investigators said a woman found the credit card in a parking lot and tried to convince them it was gift card someone had given her.

“I started getting emails asking about unusual activity and have you made these purchases, and they were one right after another,” Tammy Prater said.

Tammy's phone started going off while she was at a basketball game. She had just finished singing the national anthem, but then her phone began to sing, and with each email she saw another charge on her credit card that she didn't make.

Those charges ended up totaling thousands of dollars, leaving a larger than normal balance on her company credit card that she uses for her business.

“The income I make off that I use on my kids,” Prater said. “They're my first priority. So everything I make goes into them, and when I saw that all I could think is, ‘She's taking away from my kids.'”

The 'she' Tammy is referring to is Emily Burns. Detectives tracked her down from store surveillance cameras. She shopped at several places including Walmart, Dollar General, a truck stop and even Taco Bell.

“After talking to some witnesses she had made the comment that she was going to buy a car with it,” Grady County Sheriff's Office Lt. Johnnie Drewery said. “The last purchase that she attempted to make was at a Walmart. However, that time the card had been declined. So it was over at that point.”

Tammy believes she must have dropped her card in the parking lot of a gas station, and that's when Burns picked it up and went to town. She made it about eight miles down the road before making her first fraudulent purchase on Tammy's dime.

“I feel sorry for her. I really do,” Prater said. “She thought stealing from somebody would get her somewhere in life.”

Burns is in the Grady County Jail facing several charges.