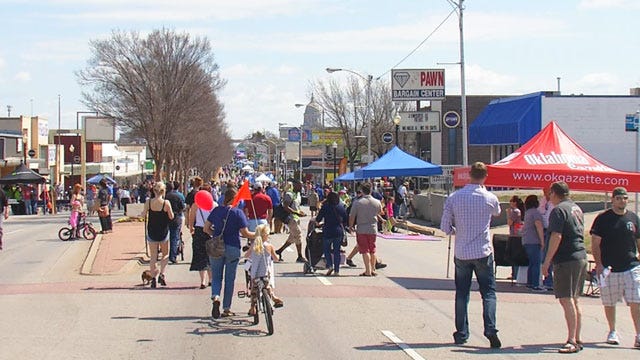 Part of a metro street was shut down Sunday to car traffic for an event pairing health and wellness with the charm of a northwest Oklahoma City neighborhood.

On the first weekend of Spring, the streets of Uptown 23rd were filled with thousands of people.

“We're trying to encourage people, number one to just move. Move and be active. But also to look into active transportation, to get your bike out, to get your skates out and encourage people to move around our city in an active sort of way and incorporate that into their everyday lives,” Shawnee explained.

Organizers expected more than 20-thousand people to spend some time uptown on Sunday.

Nearly a square mile of 23rd Street from Robinson to Western was open to active transportation only for four hours of the afternoon.

“I think anything that gets people out, gets people doing something different, something that's a little more interactive with the community is great,” said Mandi O'Connor, who attended the event Sunday.

Families arrived in flocks and got physical. From trampolines to jump rope and hula hooping, vendors offered all kinds of activities to get your blood pumping.

“It's a good way to walk a couple of blocks, get a couple of miles in,” said Cristina O'Connor.

And for those just on a stroll, it was also a chance to check out a part of town that's been on its way back to life for several years.

Learn more about the revitalization of Uptown 23rd.

“To see all of the improvements down here is something that I like about it,” Mandi added.

“You've got all sorts of new businesses popping up,” said David Rudkin, who explored the event by bicycle on Sunday.

The first Open Streets OKC was at N.W. 23rd Street last year, but organizers said they hope to make this a biannual event with the next one happening in a new location.