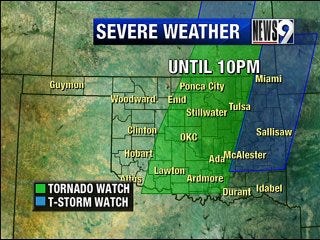 OKLAHOMA CITY -- A tornado watch is in effect for much of central and parts of eastern Oklahoma until 10 p.m.

A tornado watch was issued Wednesday afternoon, saying hail, thunderstorm wind gusts and dangerous lightning is possible in these areas.

The tornado watch area runs from a line southwest of Ardmore to southeast Kansas. A tornado warning issued earlier for northern Osage County in northeast Oklahoma expired at 4:30 p.m.

A tornado watch means conditions are favorable for tornadoes and severe thunderstorms in and around the watch area.

The strong winds are a result of a low pressure storm system approaching the state Wednesday, with a cold front moving into northwest Oklahoma by late afternoon.

To the east of the dry line covering approximately the eastern three-quarters of the state, strong to severe thunderstorms will be possible in the afternoon and evening. The main threats will be large hail and damaging winds, but tornadoes can occur during this time of year with severe thunderstorms.

The storm system will move east of the state early Thursday, ushering in cooler but seasonable weather for the rest of the week.

This storm system will also bring blizzard conditions to the northern Plains Wednesday and Thursday, with snow totals up to more than a foot with winds gusting to around 60 mph. Much of western North and South Dakota are expected to receive blizzard conditions.

The mountains of Utah and Colorado are also receiving another dose of snowfall Wednesday, which is aiding in the preparation for many ski resorts to open through the next month.

Stay with NEWS 9 and News9.com, we'll keep you advised.