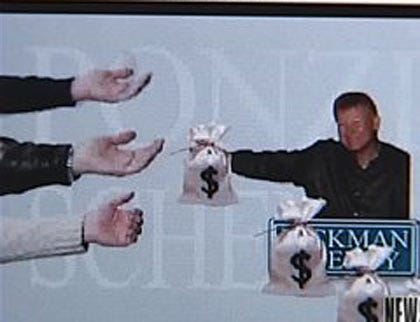 Back in 2003, Merl Bill Hickman, Sr. of Shawnee had his assets seized and his insurance business shut down after cheating investors through a Ponzi scheme.

"His first commercials promised up to 80 percent returns," said Irving Faught, of the OSC.

Hickman never invested the money, spending it on boats, motor homes and vehicles, all of which were auctioned off to the public.

"We had about 160 investors in the Hickman case and a total of about $9 million that was lost," said Faught.

Hickman is now serving 8 years in federal prison and faces 160 additional years in department of correction once his original sentence is over.

"Ponzi schemes have been around since the beginning of time," said investment banker Ann Garrett. "They collect money from people and instead of investing it, they use the money to pay off their prior investors in the form of an interest payment or a dividend."

Garrett said that practice shows no signs of slowing down.

"It could become more common now because of the economy," Garrett said. "More and more people are looking for work. They're looking for ways to make money."

Hickman's house of cards fell after a Tinker employee tipped off authorities, skeptical of what Hickman was selling.

Anyone can call the Oklahoma State Securities Commission if an investment sounds too good to be true.

Garrett also recommends asking any investment professional who approaches you about an opportunity to ask for references, where specifically they're investing that money and proof of past performance.

Hickman's victims didn't get much of their money back.

Regulators were only able to get back 10 cents on every dollar Hickman squandered.