Capel Tells Griffin Legends are Made in NCAAs 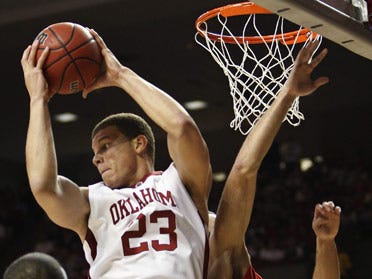 MEMPHIS, Tennessee -- The Syracuse Orange have battled Big East behemoths like Louisville, Connecticut and Pittsburgh, all No. 1 seeds and still playing in the NCAA tournament. They have dealt with big men like Pitt's DeJuan Blair and UConn's 7-foot-3 Hasheem Thabeet.

"Probably going to be the No. 1 pick in this upcoming year's draft," Syracuse guard Jonny Flynn said Thursday. "There's nothing really to say about him that everybody in this world doesn't know. He's just so tenacious on the offensive end and the defensive end. He controls the game. ... He just really plays the game at his own speed. That's what makes him good."

Griffin stands in the way of the hardworking, third-seeded Orange and a piece of history for coach Jim Boeheim on Friday night. Boeheim could win his 800th game with a victory in the South Regional semifinal against second-seeded Oklahoma at the FedExForum. The winner plays either North Carolina or Gonzaga on Sunday.

"I plan on finishing this year for sure," the 64-year-old coach said.

Boeheim calls Griffin the best big man his Orange (28-9) have faced this season. The best offensive rebounder and passer. In short, the best player in the country.

"If he hadn't gotten hurt, they'd be a No. 1 seed, which would've been good. We wouldn't have had to play him," Boeheim said.

That's plenty of pressure for any player, let alone a sophomore. Oklahoma coach Jeff Capel isn't shying away from the expectations. If anything, he's heaping more onto Griffin's shoulders to carry the Sooners (29-5) to their first 30-win season since 2002 and first regional final since 2003, when they lost to Syracuse on the Orange's way to a national title.

Capel said he told Griffin he may have to wrap his arms around his teammates and bring them with him.

Griffin has played even better in the postseason than he did in winning Big 12 player of the year. He's averaging 30.5 points and 15 rebounds in the first two NCAA tournament wins, and the player of the year candidate has missed only seven shots.

Syracuse will counter Griffin with Boeheim's 2-3 zone and a pair of 6-9 forwards in Arinze Onuaku and Rick Jackson.

"They're really tough. Both of them are better players than their numbers might show," Griffin said. "They're both big guys that are physical, and they do a good job inside. We're going to have to do a good job and be physical and keep them off the boards."

Boeheim knows what a star player can do for a team. He won his lone national championship in 2003, a run that included a regional final win over Oklahoma and then-coach Kelvin Sampson, in Carmelo Anthony's only season at Syracuse. He noted that team won the title because teammates picked up the slack in a couple games.

That's why Boeheim also is worrying about Griffin's brother, Taylor, and the Sooners on the perimeter. Willie Warren, Tony Crocker and point guard Austin Johnson all average at least 34 percent from 3-point range, and Taylor Griffin can even step outside on occassion.

"As good as their inside guys are, those four guys present big problems," he said.

Boeheim predicts an offensive game. Syracuse ranked ninth in the country and led the Big East, averaging 80.4 points, while Oklahoma with Griffin and Warren in double figures ranked 11th and put up 79.1 points per game.

"They're very efficient," Capel said. "They can hurt you in so many different ways, obviously. I think they have one of, arguably, the best point guard in the country in Flynn, and he's the orchestrator of everything."

Capel has worked his Sooners through different ways to attack the 2-3 zone, and they have played against some zone defenses this year.

"So hopefully we'll be good at attacking it," he said.

Flynn, Syracuse's sophomore guard, worries Capel the most. He was the MVP of the Big East tournament and poured in 34 points and 11 assists playing all but three minutes in the six-overtime marathon win over UConn in the quarterfinals.

"He can hurt you without even scoring a basket. But he's also a guy that he gets a great feel for how the game is going. I mean he could go 15 minutes without taking a shot, and all of a sudden, you know the next five minutes he could score 20," Capel said.

Flynn and his teammates are just enjoying themselves and ready for a neutral court on the same floor where they pulled out a 72-65 win over Memphis on Dec. 20 -- Syracuse is the last team to beat the West Regional's No. 2 seed. And yes, that six-overtime win did provide a big confidence boost.

"That really did wonders for us," Flynn said.

News On 6 A legendary Tulsa basketball coach has now been permanently honored by the city.