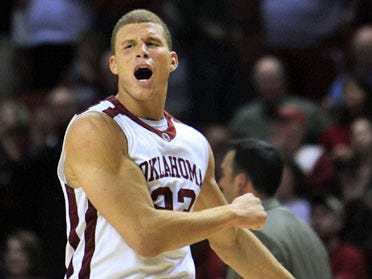 OKLAHOMA CITY -- The 2009 NBA draft just a few hours away, the possibilities for the Oklahoma City Thunder seem almost endless.  There is the possibility that the Thunder could end up with just about any player in this draft - except, perhaps, for Blake Griffin.

Former OU forward Blake Griffin is almost certain to be the first overall pick in this year's draft.  Griffin's combination of size, strength and shooting ability set him apart from the other draft prospects.  Even the Los Angeles Clippers, perennial losers in the NBA, are unlikely to be able to miss on this prospect.

That means the Memphis Grizzlies will be the key to the Thunder's draft.  With the second pick, the Grizzlies are rumored to be looking at a couple of prospects.  The Thunder will get whoever is left.

Read Dean Blevins' breakdown of the draft and who he thinks the Thunder are going to pick.

The Thunder have worked out a variety of players and most pundits believe there are just a handful of candidates for the third pick.

UConn Center Hasheem Thabeet is the highest rated big man in the draft and could help the Thunder with their defense in the paint.  During his college career, there were games where Thabeet was able to dominate the inside, shutting down opposing teams.  However, Thabeet did not start playing basketball until he was 15 years old so his basketball knowledge is limited right now and he has a history of injuries.

Spanish sensation Ricky Rubio is another potential candidate.  At the tender age of 18, the point guard led his country against the top players in the world during last year's summer Olympics.  But many people question whether Rubio will come to the NBA.  He has a professional contract in Spain and it would take a lot of money to buy out his contract.  He has also reportedly been cool to the idea of playing in smaller cities such as Memphis and Oklahoma City.

James Harden is probably the least known of the potential draft picks.  The shooting guard from Arizona State may not have the name recognition of some of the other players in the draft, but many scouts consider him to be the most NBA ready player available.  Harden has been a consistent scorer in the PAC-10 and has a good feel for the game.  The knock on Harden is that he is not as big and athletic as others at his position.

Read Dean Blevins analysis of each of the top players and see his mock draft.