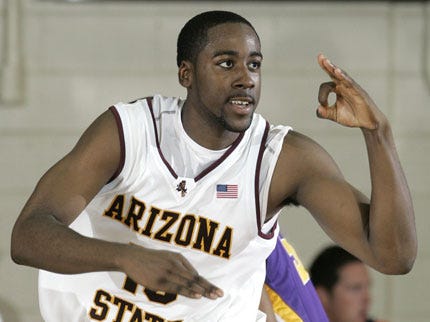 With the third pick in the 2009 NBA draft, the Oklahoma City Thunder surprised many by selecting Arizona State guard James Harden. But Harden's selection shouldn't be a big surprise, he fits with the team. Harden is one of the least flashy players available in the draft. He's a hard worker who puts the team first. Does that sound like the typical Thunder player?

James Harden comes to Oklahoma City with some attributes and some question marks. He is an underrated athlete, putting up one of the best vertical leaps during the NBA combine. He also has a good scoring touch averaging 20.8 points-per-game last year. He is an accomplished defender, utilizing his 6'-11" wingspan to the fullest extent.

However, James Harden also has some deficiencies. Harden virtually disappeared during Arizona State's two NCAA tournament games this year. He can sometimes be inconsistent when shooting from the field. And, Harden has shown a tendency to turn the ball over with a turnover rate of 3.4 per game.

But at the end of the day, Sam Presti drafted the exact kind of player he loves, a hard worker who cares more about winning than his personal stats. He will fit in nicely with the young core of players taking the floor every night in the Ford Center.