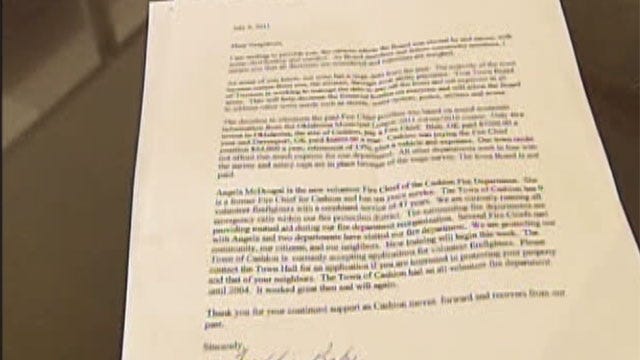 CASHION, Oklahoma -- The mayor of Cashion is providing some answers about why the city quit paying the fire chief.

That's what sparked the controversy that led to the city essentially firing the entire fire department.

Mayor Freddy Baker told News 9 she couldn't do an interview because of a possible lawsuit between Robinson and the city but she says the letter explains a lot.

The mayor writes of the town's large debt from the past that the town is working to pay off.

The mayor goes on to say only two towns in Oklahoma the size of Cashion pay their fire chiefs, and their salaries are significantly less than the $34,000 a year Robinson made.

"I thought it was interesting this letter was coming so far after the fact," Robinson's attorney Joan Renegar said.

Robinson hired Renegar to look into a wrongful termination claim. She points out the city cited budget reasons when they originally told Robinson he wouldn't be paid anymore. But she says the city still pays the ambulance director and police chief. And last year, Cashion gave raises to all city employees and hired a new office aid.

"It seems a little like the town was picking and choosing who would be paid and who wouldn't," Renegar said.

The mayor goes on to say in the letter the new firefighters are experienced and respond to every call, but Heather Nickerson says they did not show up to a fire near her Cashion home.

Nickerson and many others say there are still many unanswered questions.

The letter did not address why the city decided to fire all of the firefighters. Those questions may be answered Monday night when the city holds a pre-termination hearing.