Bethany Apartments Go Up In Flames 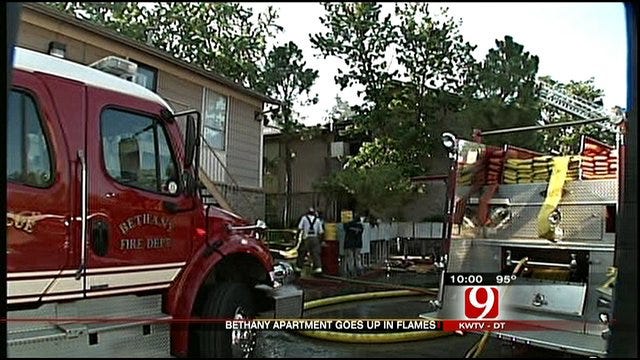 BETHANY, Oklahoma – Fire crews had to rescue a family from an apartment balcony Friday evening.

They're okay, but the large apartment fire left dozens homeless.

The Bethany Square Apartments caught fire around 5:45 Friday night. The building's owner says possibly food left on a stove sparked the fire that quickly spread. Martha Kramer saw nothing but flames when she opened her door.

"My boyfriend opened the door and took a picture and said we have to get out right now so we got right out," said Kramer.

Those who lived directly across from the hall weren't able to get out as easily. The fire chief says those in the apartment where the fire started may have left the door open and the fire quickly spread across the breezeway, trapping the people who lived across the breezeway. Firefighters had to rescue two people and four dogs from the balcony of the apartment before turning their attention to fighting the fire.

One woman did suffer from a mild cardiac arrest. But the Fire chief says he doesn't believe there were any other injuries.

Only one apartment was destroyed by the fire, three others were damaged. The other apartments in the building suffered smoke and water damage. None of the 38 people who live in the building were allowed to return home Friday night.