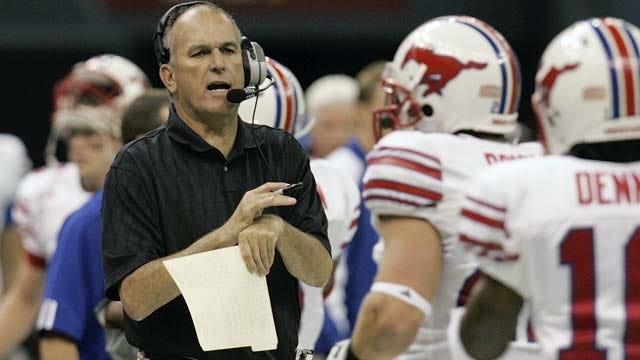 DALLAS – With Texas A&M openly declaring its desire to leave the Big 12, there is an opportunity for other schools to take the conference's inevitable opening. SMU became the first school to try to seize that opportunity Thursday.

SMU president R. Gerald Turner personally met with the editorial board of the Dallas Morning News to address the school's desire to move to a BCS automatic qualifying conference.

"We are pushing for it," Turner said. "We want the city to know we're pushing for it. We need as much help as possible, even from non-SMU alums. We believe it's good for Dallas."

The SMU football program is most famous for being the only one in NCAA history to receive the death penalty. The Mustangs received that punishment in 1987 and have largely been relegated to obscurity since.

But the program has been on the rise since the hiring of head coach June Jones. Jones directed the Mustangs to 7-5 regular season records and bowl bids in each of the last two seasons. They won the 2009 Hawaii Bowl to secure their first bowl win in 25 years and played in the Conference-USA title game last year.

While the school has made positive strides, it remains a difficult sell to BCS conferences. The Big 12 fits SMU's geographic location, but the conference already has a strong hold on the Dallas-Fort Worth market.

Turner told the Dallas Morning News that SMU would prefer joining the Big 12, but that the school would be open to talking with any BCS conference. He listed SMU's location and June Jones' recent track record among the reasons SMU would be a strong addition to any conference.

The very public proclamations by both Texas A&M and SMU could turn the competition for the Big 12's eventual opening into a circus. Usually schools remain quiet about such desires until there is something concrete, but A&M and SMU both have made their desires abundantly clear.

That could cause other schools to publicly jump into the Big 12 fold. Other schools commonly listed as targets of the conference include BYU, Houston, Air Force and Louisville.