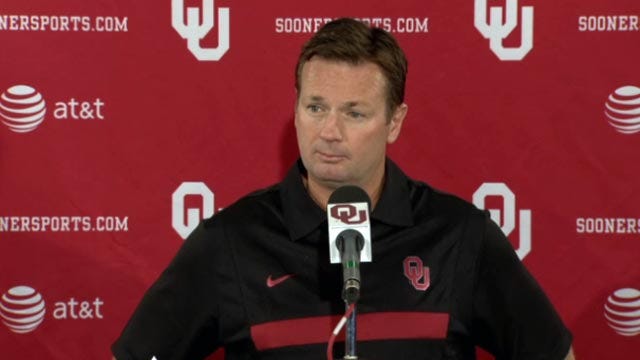 NORMAN, Oklahoma – The Oklahoma Sooners enter week six with an undefeated 4-0 record ranked No. 1 in the USA Today Coaches Poll and No. 3 in the AP Top 25.

Coach Stoops previewed the upcoming game Tuesday at his weekly press conference and there was plenty to talk about with such a rivalry game on the line.

"We're 4-0 coming into the Texas game that everyone is anticipating and excited about. They're having an excellent year with also being 4-0 and so it's where you want to be. I can sense it in the locker room right after the game that our players were already anxious about it and anticipating it," said Stoops. "Now it gets down to doing the work throughout the week to be prepared for it. I know our guys, we had a good day yesterday and we are looking forward to the challenge as it always is a challenge going down there and playing them."

Difference between last year's Texas team and this year's team:
"There's a lot. Offensively, defensively they've got totally new schemes. Offensively they're using a couple of different quarterbacks that are doing a really good job. They're running the football and have a really balanced attack with running the football with over 200 yards per game and then throwing it for a little over 200 yards per game. Defensively they're playing aggressively. They're just different scheme wise and they've got good players, fast players and they're doing a good job executing."

On the pressures on Texas and OU entering the game:
"There's pressure on us and I welcome it," said Stoops. "I look forward to playing it." Coming into this game that's what you want. We want to be in this position going after it and we're excited about it."

On Texas running back Malcolm Brown:
"He's an excellent runner, he's got great size and strength and they're doing a nice job creating seams for him the way they're running the football."

On taking the field in Cotton Bowl Stadium:
"It's exciting, you can't but get the hair standing up on the back of your neck and it's exhilarating. I guess that's the best way to say it—its exciting and something you want to feel."

On if he sees a difference in the players for a game like this:
"The preparation, you know there's a sense of urgency and getting the plan down and there always seems to be a little more air of intensity or focus to a degree it's there.

On if OU feels like they have an advantage with experienced quarterback Landry Jones:
"Hopefully it's a positive, we love the way Landry plays, what he's doing and sure now that the more and more experience he gets. I believe that position needs supported. You've got to protect him, you've got to run the ball, receivers got to catch it…so it isn't all on those guys, that position needs supported for it to perform well."

On the Strengths of Texas' defense:
"They've got good speed and excellent guys up front. They do a good job trying to pressure you from different ways so you've got to be able to at times take advantage of that too. They do a nice job mixing it up and playing aggressively."

Stoops also commented on how well the OU offensive line had played especially last game in the absence of center Ben Habern. Last week Gabe Ikard stepped in at center and the team "feels good about how he is playing" according to Stoops.

Stoops said Trey Franks "probably won't" start this game after returning from a two- week suspension, but did say that he will still play.

On the evolution of the OU vs. Texas series:
"I think since the time I got here in 1999 and 2000 when we were both fighting for the division championship and to play in the Big 12 Championship—I thought from then on it couldn't get much worse. It's what you want in a rivalry game. I think it's great, it's what you want it to be."

On how Texas fans treat Bob Stoops and things he notices on the bus ride into play the game:
"You get all kinds of things pointed at you and flexed at you and everything else. I truly don't marvel at people. Like really? I'm on a bus, I can't hear you, I don't know you—I could care less. You worry about people sometimes-find something positive to do. I don't think I've been mooned, I probably would have remembered that."

"I've experienced at this point in my career a lot of rivalry games through the years. So yeah it's what I anticipated it to be, and it's what you want it to be."

Stoops was also asked about the infamous that coach Barry Switzer used to wear that said ‘Beat Texas':
"Why wouldn't I wear a hat like that? If Nike gives me one, I'll put it on. I mean what do you think I'm saying not to beat them?"

On fans perceptions of the rivalry:
"Everyone thinks their (rivalry) is the most special. I'm a descent part of this one so of course it's more special and anyone who is involved in them, that one becomes the most important or the most special one."

On this week's rankings:
"We are no. 1 in the coaches poll and that matters so there's too much football to be played for us to worry about that."

On Jarvis Jones and his play:
"Jarvis did play well and it's been so long since he played it's just getting him more and more comfortable and knocking the rust off. He'll play at tackle, but I'm sure we will experiment with him as the week goes with him in some at guard too."

Stoops also said that Daryl Williams is going well and has recovered from the ankle injury he sustained. "He's come along well."

News On 6 Tulsa Public Schools is reminding families to apply for free or reduced priced lunches before the October first deadline.

News On 6 Tulsa Public Schools is reminding families to apply for free or reduced priced lunches before the October first deadline.

Joseph Holloway Coaches and administrators with Tulsa Public Schools said athletic teams are doing even better than expected when it comes to dealing with COVID-19.

News On 6 Oklahoma’s own Carrie Underwood releases her first Christmas album on CD and digital on Friday.
View More Stories