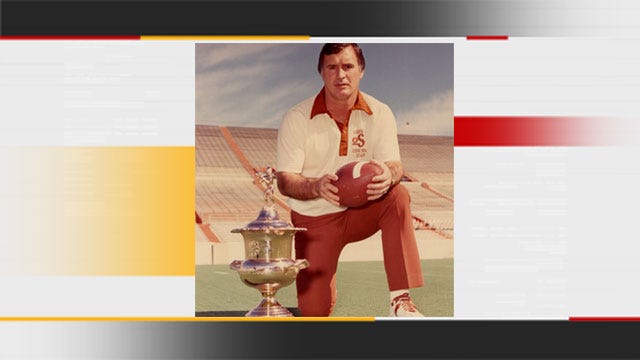 Plans for services are being finalized, but they are expected to take place in Stillwater next week.

Stanley coached the Cowboys from 1973-78, and compiled an overall record of 35-31-2. He also had two stints as an assistant coach at OSU. He served as defensive coordinator from 1963 through 1968 and again in 1972 before being elevated to head coach.

Stanley led OSU to a share of the Big Eight title in 1976 after posting a 5-2 conference mark, including a 31-24 victory over No. 5 Oklahoma in Norman. The Cowboys capped off their 9-3 campaign with 49-21 Tangerine bowl victory against BYU. Two seasons prior, Stanley guided the Cowboys to a 7-5 record, including a 16-6 victory over Brigham Young in the Fiesta Bowl.

Stanley went on to a lengthy career in professional football as an assistant with the Giants and Falcons. He coached the USFL's Michigan Panthers to a championship in 1983. He later returned to the NFL with Tampa Bay and the Houston Oilers. He served as the Director of Player Personnel with the Arizona Cardinals for 12 years before retiring.

Earlier this month, Stanley was presented a football autographed by the 2011 Oklahoma State players, who were in Arizona for the Tostitos Fiesta Bowl.

Stanley was born in Kentucky and graduated from Texas A&M, where he played football under Paul "Bear" Bryant. He was part of Bryant's "Junction Boys" at A&M and played on an undefeated conference championship team.

Stanley is survived by his wife, Sylvia, and four children.

"The Oklahoma State family was saddened  about the passing of former Oklahoma State coach Jim Stanley, who  served as defensive coordinator from 1963 to 1968 and head coach from 1973 to 1978.   We are grateful Coach Stanley had the  opportunity at the recent Fiesta Bowl to visit with several players who played for him during his years as head coach of the Cowboys.  Their visits over the years always lifted his spirits and spoke volumes about the amount of respect they held for their former coach.  Coach Stanley led the Cowboys to their first appearance in the Fiesta Bowl in 1974 and a victory over BYU, 16-6.   As a player for legendary coach Paul Bear Bryant, Coach Stanley preached toughness. His players worked hard for him, and he worked hard for them.  He will be remembered with respect and admiration for his contributions to Oklahoma State football."

"Jim Stanley is the reason why I have a job in college football. He gave me my start. He was the defensive coordinator here at Oklahoma State when I was a player and then he became the head coach," said OSU coach Bill Young. "He was an extremely tough individual and very hard-nosed - an unbelievably good football coach who had one of the best defensive minds I have ever been around. He will be missed."