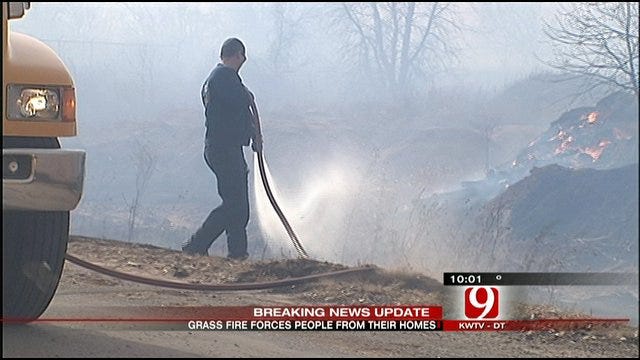 A wildfire which broke out near I-35 and SH-9 Sunday afternoon was a little too close for some Norman residents. The fire chased residents from about 100 mobile homes in a neighborhood just west of I-35.

Firefighters finally gained control of that brush fire after more than two hours. Residents have now returned to their homes, but it was touch and go for a while as they waited to hear if their homes survived the fire.

One of the evacuated residents was Rebecca Escabedo.

"Just kept getting smokier. It was burning our eyes and everything and the firemen finally came," she said. "I grabbed a few personal items, my dogs, my son, and left the house."

For hours homeowners had to sit and wait while firefighters did their best to keep the flames from spreading to the mobile home park.

"With the open flames that I can spot from here, it is threatening because the embers flying in this high wind, they can catch any amount of this," said evacuee Dennis Maloney.

Thirty-mile-an-hour winds and dry conditions made fighting the fire more difficult for the 10 units on the scene.

"It's just, you can't really chase the fire. You just have to set up areas where you have to stop it," said Norman Fire Chief Brian Bailey. "It's really a remote area and really hilly and really difficult to fight it."

Chief Bailey says investigators will be on scene trying to determine a cause but homeowners say they have an idea how it started.

"There's a number of homeless people that live on that river and, for whatever reason, they're there. They go down there and build fires and they walk away from them," Maloney said.

Norman Fire Marshals will investigate the cause, but Chief Bailey says it's a large area that a lot of people use, so finding an answer may be difficult.

No one was injured in this fire and no structures were damaged.