Will Westbrook & Ibaka Be Joining Durant In All-Star Game? 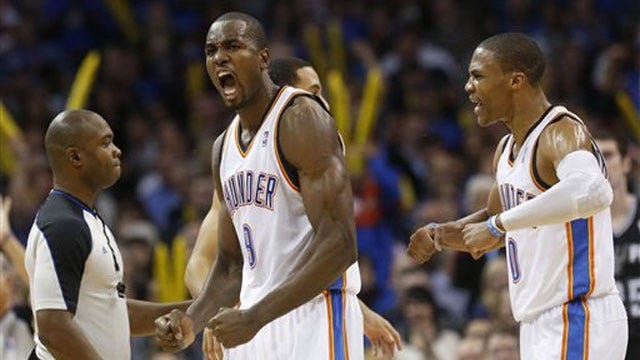 It came as no surprise Thursday night when the NBA All-Star starters were announced and Kevin Durant's name flashed upon the screen yet again.

Durant has blossomed into a true superstar and he will likely start every All-Star Game for the next 10 years. Joining Durant in the Western Conference's starting lineup is Kobe Bryant, Dwight Howard, Chris Paul and Blake Griffin, all representing the fine city of Los Angeles.

But that's not what we're here to talk about. Now that the starters are set, it's time to decide the guys who should fill out the squad, including if any other Thunder players deserve the bid.

The competition this year is as tight as I can ever remember. There are a handful of guards and forwards that are putting up seemingly identical numbers, making the cut list pretty tough.

Here's a list of the guys who the coaches that select the roster are going to have to choose from. Keep in mind, you can only choose seven. Who makes your team?

Russ has been a scoring machine once again this season for OKC (currently 4th in West) but does take a lot of shots to do it. There are a lot of nights where he'll magically end up with 23 points on 25 shots, which isn't great. But his production goes well beyond the shooting percentage. Westbrook has a non-stop motor and plays bulldog defense, always finding a way to contribute even if his shot isn't falling. Oh yeah, and his team has the best record in the NBA. I like Russell's chances of making the team, but we won't know until Thursday.

The Beard has had quite the season so far. To recap, he got traded from a really good team to a mediocre team, has scored a whole lotta points while taking a whole lotta shots on said mediocre team, and currently is in a daily battle to find enough wins to make the playoffs. Harden got max money and max playing time from Houston but it hasn't impacted the win column the way the Rockets hoped it would. Harden's player efficiency rating (PER) is very high, partially due to his exceptional ability to get to the free-throw line and knock ‘em down. That's what allows him to have those 7-25 shooting nights yet somehow still end up with 25 points. It seems like most people have already penciled Harden in for one of the spots, but I'm not so sure if I'll do the same. His numbers are pretty good, but what impact is he really making? Houston finished last season 34-32. This year the Rockets are 22-21. So despite all the hype, he's not turning those numbers into wins like Curry, Westbrook and Parker are. Should that be taken into consideration? Keep in mind though, the game's in Houston. So he'll probably get in.

Parker has always been the model of efficiency and nothing has changed. He shoots an excellent percentage for a guard and runs the show for one of the best teams in the league. In most seasons, Parker would be a no-brainer for a roster spot, but he's up against some serious competition at the guard position this year. The Spurs' excellent record will help his cause but we'll have to wait and see if it's enough to secure a spot.

Curry is one of the NBA's truly elite shooters and continues to improve his development at the point position. His 46 percent mark from 3-point range is No. 1 in the league and his team is greatly defying the odds. Like his teammate David Lee (we'll get to him shortly), Curry struggles on the defensive end of the floor but rebounds well for his position. If Curry makes the team, you'll likely see him play off the ball like he did back in the day at Davidson; using screens and cuts to get open looks.

Of all the candidates on this list, Ibaka easily scores the least and his rebound numbers aren't amazing. At first glance, Ibaka's base statistics might not warrant a bid, but you've got to dig a little deeper with this guy. He leads the NBA in blocked shots and shoots an incredible 56.4 percent from the field (third in the West). His scoring average isn't limited because he can't do it; it's limited because he doesn't shoot that much. He lets Durant, Westbrook and Kevin Martin take a vast majority of the Thunder's shots, yet still scores 14 a game because he's so efficient. Should he be punished just because his teammates are so good? Put Ibaka on the Suns or Hornets and I'll bet you anything he could score 20 a night.

Aldridge has to be one of the favorites to grab a roster spot. The guy is putting up very solid numbers and without him; the Trailblazers would be in a world of hurt. But as it stands, they have exceeded expectations tremendously and are right in the playoff race.

Lee is a slightly undersized power forward, but he fights like crazy to make up for it. His rebounding numbers will reflect that fight, but his constantly-poor defense shouldn't be ignored. Lee, like Aldridge, is playing for a team that is greatly exceeding expectations. A lot of people thought the Warriors would be improved, but not quite this good. His argument is helped by the fact that his rebound average is higher than most of his competition at the forward spot, but his point total might be a little misleading. The Warriors play at a breakneck pace which leads to more possessions and more scoring opportunities. Nevertheless, Lee has been consistent and efficient and deserves serious consideration. With the way the Warriors have played this season, it's hard to imagine them not getting at least one All-Star. But should they have two? And if they only get one, is it Lee or Curry?

Cousins started the year slowly but has come on strong in the past couple of weeks. His field goal percentage is a little low for an ideal All-Star, but his point and rebound totals are impressive for a guy who usually is forced to create his own shot due to a lack of good guard play. His case is hampered by the Kings' poor record and the fact that he's not exactly known as one of the league's finest citizens.

Jefferson has been a solid force for Utah all season, pairing with Paul Millsap to form one of the toughest post combos in the West. Unfortunately for Jefferson, the Jazz are about as irrelevant a franchise as there is, and his production often times goes unnoticed. If you're including defense in your selection, Jefferson might be one of your choices. He's a hard-nosed guy that does a good job protecting the rim, but might end up getting overshadowed by bigger names on better teams.

Thunder fans know Pekovic as the guy who takes Kendrick Perkins' lunch money every time OKC plays the Timberwolves. The 6-foot-11 center anchors the Wolves' interior defense and his ability to score inside lets Kevin Love play all over the court rather than being forced to stay on the low block. Pekovic's numbers aren't exceptional but they are steady and if you factor in his defense, he might deserve a bid.

Yawn. Just another incredible season for the future Hall-of-Famer. Seriously, when is this guy going to hit a decline? Not this year, that's for sure. Of all the people on this list, Duncan is as sure of a lock as there is in my eyes. He's having an incredibly efficient season while playing terrific defense on an elite team. Count on Duncan occupying one of the roster spots in the West.

Randolph and Marc Gasol combine to form the best frontcourt combo in the NBA. Randolph's offense and Gasol's defense make them as deadly a tandem as there is. Z-Bo can score from anywhere and uses his weight to blow people out of his way for rebounds. He's having a solid year for the Grizzlies, who sit in the West's No. 4 spot, but are just 12-12 since their 12-2 start. So should he be an All-Star? His rebound numbers are great but he could certainly be a little more efficient for a big guy. Memphis deserves an All-Star, and even though Gasol has had a solid year, his numbers shouldn't warrant a bid.