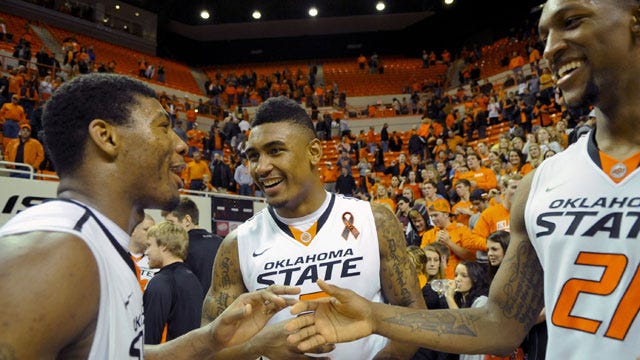 The Big 12 is heating up and the race is as tight as it could possibly be with a three-way tie for first place. Bedlam in Stillwater highlights this weekend's action as we take a look at who's hot and who's not in the league.

Maybe Kansas is deeper and more talented across the board and perhaps K-State has been more consistent but one thing is certain -- nobody is hotter than the Cowboys. Travis Ford's team has ripped off a Big 12-best six wins in a row heading into this Saturday's Bedlam showdown in Stillwater. This OSU team has really turned the corner after losing at OU 77-68 on Jan. 12, having gone 7-1 since and has also won three-straight road games, bucking the long and unfortunate trend of road ineptitude at KU on Feb. 2. OSU is also as strong as it's been all year now that Marek Soucek and Brian Williams are back from injury. Add that boost in depth with the overall progression and maturation of a youth-oriented team, and you have a group of Cowboys peaking at the right time.

Things haven't been great for the Jayhawks lately but one of the benefits of being KU is that you can have a disastrous losing streak and still be tied for first in the Big 12. Starting with a home loss against OSU, KU dropped three straight games, lowlighted by arguably the worst loss in school history at TCU on Feb. 6. But after losing to OU on Feb. 9, Kansas righted the ship on national TV against rival Kansas State. The Jayhawks, led by explosive freshman Ben McLemore, blitzed KSU 83-62, proving the Big 12 title still very much goes through Lawrence.

One of the things that sets K-State apart is its consistency. Even in mid-February, the Wildcats still don't have a bad loss, having dropped games against then-No. 4 Michigan, Gonzaga, at Iowa State, and two against rival Kansas. No Big 12 team is more consistent but the Wildcats lack star power outside of Rodney McGruder (15.2 ppg, 5.3 rebs) and have a rough stretch of games to close out the season, making a Big 12 title all the more difficult, especially with KU sweeping the season series and finishing up at OSU.

The key for the rest of the year will be how this team responds to the season-ending injury to freshman Buddy Hield. OU is on a two-game winning streak and the two wins are impressive. First, beating Kansas is no small feat even when the Jayhawks are on a losing streak (just ask KSU), but the Sooners took care of business in Norman. OU then followed it up by thrashing TCU, which isn't something to hang your hat on but the Sooners were so dominant that it deserves a second glance. OU held TCU to just 11 first-half points and didn't allow the Frogs to hit a shot until the 8:50 mark of the half. OU's defense can be stifling when it wants to be. How the Sooners respond without Hield will be important for its NCAA Tourney placement and the first test comes Saturday at rival Oklahoma State.

There's no question the Bears have talent – as evidenced by Pierre Jackson and Isaiah Austin in particular – but Scott Drew's coaching is frequently questioned. Baylor lost three straight before smashing hapless Tech 75-48 and laying a 20-point whipping on West Virginia. This team is predictably unpredictable. They are very much on the NCAA Tournament bubble but the Bears need a few more resume-padding W's over quality opponents to punch their ticket to the dance. This Saturday at Kansas State wouldn't be a bad place to start.

Oh Iowa State, what is there to say right now? The Cyclones are the only team giving Baylor a serious run for the title of Big 12's most inconsistent team. ISU has one of the nation's best offenses (seventh nationally in scoring) and rebounds (17th in boards) and passes (16th in assists) but for some reason can't find wins outside of the friendly walls of Hilton Coliseum. ISU has lost five of its six Big 12 road games, including its past four and one of those was at lowly Texas Tech. But somehow at home they are capable of beating Kansas State, Baylor and Oklahoma, the latter by 19. The Cyclones have dropped two straight but a Saturday home date with TCU should get them back in the win column.

West Virginia had pieced together a three-game winning streak to get back over the .500 mark for the season and level its conference record at 5-5 but the three teams the Mountaineers beat just so happen to be the three below them on this list, so that curbs a bit of the enthusiasm. Curbing the enthusiasm even more, however, was the harsh snap back to reality delivered by Baylor, who dominated WVU 80-60 in Waco. Bob Huggins' group has clearly been improving lately and likely won't be a team you want to see on the schedule down the stretch, especially in Morgantown, but this team doesn't have enough talent to make any real moves this season.

The good news for Texas is Myck Kabongo's 23-game suspension has come to an end. The bad news is that Texas needs a miracle to reach the tourney. Fresh off a 13-point home loss to OSU, the Horns had dropped three of their past four and appear destined to miss the Big Dance for the first times in Rick Barnes' 14 seasons in Austin. Kabongo is certainly going to make a difference but the schedule down the stretch doesn't set up well for UT. In his first game back, UT topped a tough Iowa State team in double overtime behind a solid 13-point, seven-assist performance from Kabongo in his first action of the season. But, as we've already discussed, the damage has already been done and a visit to Kansas looms.

The Red Raiders aren't a very good team. Tech has lost more Big 12 games by 34 points (two) than by single digits (one) and Wednesday's home meeting against streaking Oklahoma State didn't go much better. The Raiders trailed the Cowboys by 21 at halftime and allowed Markel Brown to score 25 points in the opening half alone. Tech's two conference wins have come against cellar dweller TCU and a surprising five-point win against Iowa State on Jan. 23. But Tech has now lost five straight and its nine Big 12 losses have come by an average of 21.3 points per game. This team has a long way to go before it will be competitive in this league again.

For the first time since the Big 12 season started TCU has reason to feel good about itself. The school's first win in Big 12 history just so happened to coincide with its first ever victory against a top 5 team when the Frogs upset No. 5 Kansas on Wednesday. And then on Monday OU took away all the warm and fuzzies. The Sooners slammed TCU and allowed the Frogs to score only 11 first-half points before coasting to an easy 27-point thrashing. This team just doesn't have the depth or talent to avoid a last-place finish in its inaugural Big 12 campaign.