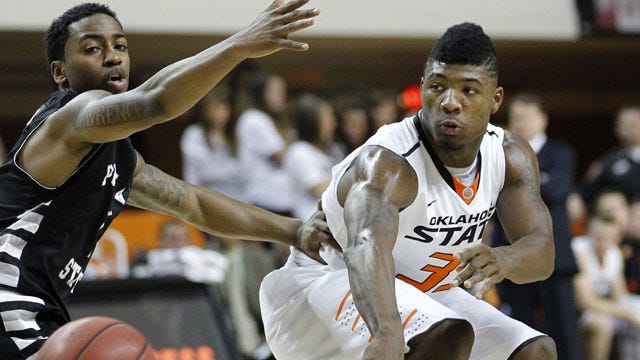 Marcus Smart will announce tomorrow at a press conference on the OSU campus at the student union at 12:30 p.m. whether he's decided to leave for the NBA or will return to the Cowboys for his sophomore season.

Indications are he's bucking a strong trend of underclassmen leaving for the NBA if they are expected to be a high first-round draft pick. Smart is listed on NBA mock drafts as going anywhere from the No. 1 overall selection to No. 7. The remarkable freshman point guard is not expected to drop below the fourth or fifth overall pick.

Smart has thoroughly enjoyed his year in Stillwater and believes the Cowboys would have a chance to make a run at a Big 12 title next year. Based on who OSU should have returning, I'd be surprised if they were not ranked in the top ten in the preseason.

Here's the list with their position and the year they will be in school when the 2013-14 season begins:

Don't be surprised if Smart announces he's staying for his sophomore season. The press conference is open to the public -- an indicator in and of itself. Quite a talent. Thunder might use his pure point guard talent in the 2013-14 draft.