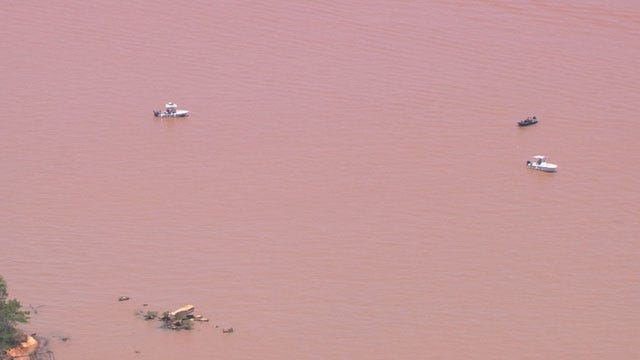 One of two young girls who were injured in the accident was discharged from OU Children's hospital on Friday. The other child remains in fair condition while the methodic search for the missing man continues.

From the air, Jim Gardner and Bob Mills Sky News 9 HD tracked divers and search crews that have been scouring the water since it happened just after 10 p.m. Thursday.

OHP says the pontoon boat that was carrying 10 people, including 5 kids, was tethered to another boat when a 20-foot-long white and dark ski boat hit the pontoon boat at around 30 miles per hour. That impact caused the ski boat to go airborne and land on the second boat, injuring the knee of Midwest City man on that second boat.

Gary McIninch, 55, was on the pontoon boat, but was ejected into the water on impact. He hasn't been seen since.

McIninch's family tells News 9 they want their privacy right now. Still, wishes of goodwill for the injured and good luck to the search teams were popping up all over Facebook Friday afternoon.

OHP Spokesperson Betsy Randolph says they expect to find McIninch's body in the next 24 to 48 hours.

"When he surfaces depends on how deep the water is, the water temperature, how much the victim weighs, and the last thing the victim had to eat before the accident occurred," said Randolph.

OHP is asking anyone who thinks they saw or heard something relating to the crash Thursday night to use their mobile device to call OHP at *55. They're looking for any and all information.