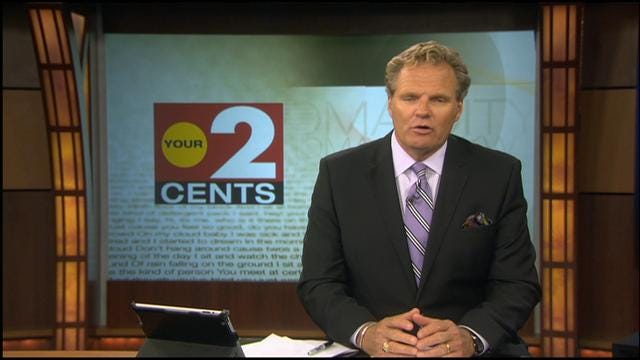 I told you one of the regrets I have is not serving in the military, even though at 18, a friend and I actually went to the recruiting station to check out the Naval Reserves.

Here's what you had to say. Bob first: "..there are a lot of us out here who have the same regret, and while not all of them are thankful for the sacrifices of our military men and women, I join you in honoring them."

Stuart writes: "I have been asked many times throughout the years if I could change anything in my life what would it be? I definitely would have spent some time in the military.."

Ann from Del City says: "..that was so touching it made me shed a tear. How open and honest of you."

But William from Stroud accused me of false piety: "Kelly had his reasons, right. It wasn't convenient, so he should suck it up and shut up.."

Jan said: "..your thoughts on the 2 cents tonight were outstanding. It takes a lot for a man to face a regret of not going into the military."

From Kendall: "Great segment!! You shouldn't have any regrets about not serving. It isn't for everyone."

Finally, Brent from Wayne says: "I sometimes feel that same regret. Had I joined I would have been in during desert storm but even with knowing that and looking back I wish I would have served."