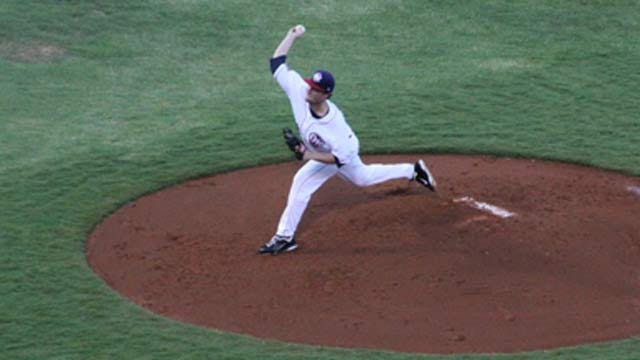 The New Orleans Zephyrs scored six times on six hits in the eighth inning to break open the game in an 11-0 win Thursday in front of a crowd of 5,996 at Chickasaw Bricktown Ballpark.

The RedHawks suffered their second shutout in six games to the Zephyrs, who also held Oklahoma City scoreless in their July 5 meeting at New Orleans.

New Orleans' Gorkys Hernandez and Jordan Brown each went a game-high 3-for-5. Kyle Jensen batted in three runs for the Zephyrs.

Thursday's loss was the second-largest shutout loss in RedHawks team history behind a 12-0 loss July 22, 2003 against Nashville. Thursday also was the sixth shutout loss of the season for Oklahoma City.

A RBI single by Brown and two-run homer by Jensen put New Orleans ahead, 3-0, in the top of the fourth inning.

The game remained in reach for the RedHawks until late.

A sac fly by Bryan Petersen scored Hernandez for a 4-0 New Orleans lead. A double by Brown and single by Green put New Orleans ahead by six runs. A fielding error by RedHawks left fielder Ruben Sosa allowed two more runs to score before the end of the inning.

In the top of the ninth inning, a RBI single by Jake Smolinski and a sac fly by Jensen put the Zephyrs in front by11 runs.

RedHawks starting pitcher Jake Buchanan (1-2) fell one short of his career high, by striking out eight Zephyrs hitters in the loss. He allowed five runs on eight hits in seven innings and walked one.