Sooners And Cowboys Looking To Improve On Defense In 2013 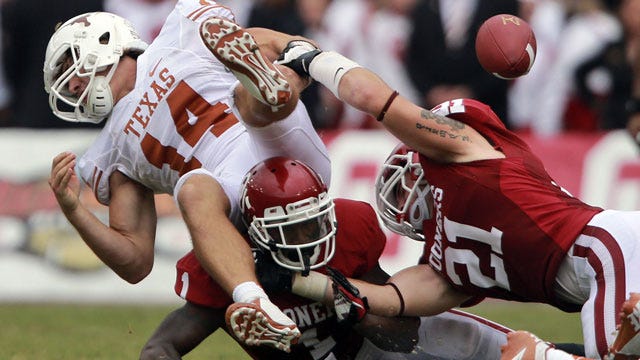 Picture the most famous hit in college football in recent memory. South Carolina defensive end Jadeveon Clowney bursts through the Michigan offensive line and flattens Wolverine running back Vincent Smith. Smith's helmet flies off and lands five yards behind him, while Clowney recovers the fumble his hit has caused.

Now, imagine the play during the 2013 season. Instead of celebrating, Clowney looks down at his feet in bewilderment to see a flag thrown by the referee. He's called Clowney for targeting and Clowney is ejected; the greatest hit in sometime has officially been dubbed as illegal.

That's the world college football will be entering this season, as the new targeting rule takes effect in 2013. Tuesday morning at Big 12 Media Days in Dallas, Big 12 coordinator of officials Walt Anderson walked members of the media through the new rule, explaining the difference between targeting and not targeting, but also uncovering controversial points with the new rule.

The Clowney hit had already been addressed by ACC coordinator of officials Doug Rhoads, who said Monday he would have flagged Clowney for targeting. Anderson said Tuesday it would have been a very close call (only after he said he didn't recall the particular play and had to be shown it by CBS Sports' Dennis Dodds).

The rule is well intentioned, designed mainly to eliminate head-hunting hits that cause lasting injuries from the game. Ejections are certainly a severe enough penalty for those types of hits, which have no place in the game.

However, with defensive players already concerned with doing anything they can to slow down offenses that are always increasing in speed, the last thing they want to be doing is worrying about how they're going to hit a wide receiver coming over the middle.

"It's not something I enjoy hearing about," Baylor defensive back Ahmad Dixon admitted. "It's not something I want to be a rule, but you have to protect people. It's almost frustrating to guys like myself who are hard hitters, vicious-playing players. We have to slow down; we can't run to the ball as fast; we can't hit guys like we want to hit them. We can't just really bring the boom like we want to."

The new rule will no doubt be a pain for the first few weeks—even years—but something had to be done if football wanted to continue to be a sport in the future.

"The game is under attack," Anderson said. "We will either work at changing this culture from within, or it will be worked at being changed from without, and I don't think anybody within the game will argue that we would much rather change it from within than have it changed for us from without by other people."

Not all of the players are worried about adjusting to the new rule. Oklahoma cornerback Aaron Colvin is far from the biggest player on the field, not known for bone-jarring hits, and he knows it.

"I've always been small so I've always tended to go down low on people but I've gained some weight this offseason so that rule hurts because I was going to try to go up high some this season," Colvin said with a laugh.

"I'm not really worried about the new rule," Colvin continued. "When you feel like you need to limit your game or put some type of restraint on your game because of a rule that you don't want to break, then that's just going to hinder your game. My game, I just go out there and play physical and fast; that's what I do. If it happens, it happens."

Anderson said the key for defenders will be lowering their targets zones. He showed a clip of what appeared to be a perfect form tackle, with the defender's facemask planted squarely in the chest of the wide receiver. However, Anderson said the play would probably be ruled as targeting, saying the defender needed to lower his target zone "about three to four inches" to be safe.

That explanation flies in the face of generations of coaching advice, but Oklahoma State linebacker Shaun Lewis understands the rules committee's thinking.

"I guess what they want us to do is go lower to prevent the head injuries," Lewis said. "That's never really been a problem for me. I feel like that's the easiest way to take a guy down; take what he runs with away from him. I guess I would rather have a lower body injury than a head injury."

This rule is not a bad thing for college football, but it will definitely take time for players to adjust. Under perhaps more pressure are the officials, now tasked with making a split second decision that not only penalizes a defense 15 yards, but could also remove the best player from the game.

It's an unfortunate reality that's in response to an unfortunate problem. Head-hunting has to be eliminated from college football and if you want to be watching football 20 years from now, you'll gladly suffer some missed called in the present for that to happen.

These are the signs officials will be looking for to determine if a particular hit is targeting:

• Launching toward an opponent to make contact in the head or neck area.

• A crouch followed by an upward and forward thrust with contact at the head or neck area.

• Leading with the helmet, forearm, fist, hand or elbow into the head or neck area.

• Lowering the head before attacking and initiating with the crown of the helmet.

These signs would indicate a clean hit that is less likely to be flagged for targeting:

• A heads-up tackle where the crown of the helmet does not strike above the shoulders.

• The head is to the side rather than used to initiate contact.

• Incidental helmet contact due to players changing position during the play.