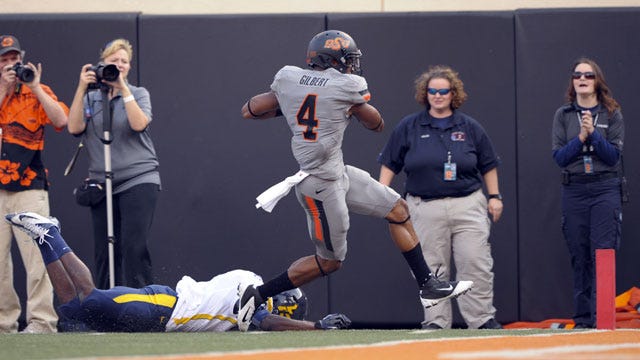 Second-year cornerbacks coach Van Malone talked after practice on Monday about the development of the Cowboys' corners heading into the 2013 season.

Much is expected of the OSU defense and the corners will play a vital role in the unit's ability to make a turnaround after a disappointing run last season in the secondary.

Malone, a 10-year coaching veteran in college and the NFL, was pleased with what he's seen from his guys after the first few days of practice in Stillwater, particularly following Monday's two-hour session.

On what he looks for when recruiting a cornerback:

"The first thing we have to have is speed, the ability to run because the receivers that we face travel down the field at a high rate of speed. Next, he has to have athletic ability and good size for the position. All of these things – except the speed - we can fudge on them because if a guy has one attribute that is way above the standard, then he can compensate for the ones he may not have. For example, a smaller guy who has incredible speed can still be successful as a cornerback. Then, a guy has to love the game because we ask them to do some things at cornerback that really stress his love. He has to accept a challenge, he has to be competitive, he has to love being out here and competing. Those are the main things that we look for in recruiting a cornerback."

On what is typically the biggest transition for freshman cornerbacks:

"The first thing is the speed of the game. In recruiting, they always hear ‘You're so good, you can come in and start,' but then they recognize. These guys, the Darius Currys, the Taylor Lewises, they recognize - wow, the calls came in fast, I've got to digest it, I've got to see what formation the offense is in, and then I've got to apply all those rules that I got in the meeting. The speed of it moves a lot faster for these guys. They're learning, but they're expected to do it while they learn. There are not many college programs where they have freshmen come in and they automatically know they're going to redshirt. At this point, it's free game, so those guys have high expectations. When they go onto the field, we as coaches try to keep the scheme simple for them, but when you play against the Oklahoma State offense every day, it may be simple, but it's moving fast. Your reaction, your knowledge of the defensive schemes, your technique, all of that has to be on target."

"Because of the fact that he's played in Big 12 games, he's seen Oklahoma State, he's seen this offense, he's seen college football plays. He comes in very different than a high school guy. He comes in with a great amount of awareness in terms of splits of receivers and in terms of why do we make this call. At Kansas, he did some of the things that we do here. The terminology is different. Some of the techniques may slightly be different and the words are in different form, but once he overcomes that, he'll fall right in line with our older guys who have been around here for a while."

On the play of the cornerbacks to this point:

"I told them this yesterday. The reason you have fall camp is to make mistakes and to learn from the mistakes. To be challenged as a defensive staff. Really as an offensive staff, we put them in positions that challenge them on the field that may happen against Mississippi State but may not happen again until the OU game. We have to challenge them with a season full of adjustments, a season full of things that they were not prepared for, so that when we get into the season, we can go back and refer to. As a coach, knowing that's the plan, I just have to expect and demand that they get better every day. I'm pleased with their progression. I know we have a long way to go. I know there has been a lot said about the aggression we're playing with and all those things, but we can't give up any plays. If we make a play, okay, we made that one, but the next play, they have the potential to score, so we can't rest on our laurels on first down. We have to play until we get to the sideline. Once we get there, we have to be ready to play again. I'm pleased with where they are and how they really have come together as a group. They have really accepted Tyler Patmon into the fold and taken the young guys under their wings. That's a mark of some of their leadership, with guys like Kevin Peterson and Justin Gilbert as they move forward."

On the play of Kevin Peterson during camp:

"He is a consistent player. As a coach, you dream of the dynamic player, but really, you want the consistent player. He studies the film, he knows what his assignment is and he always is where he's supposed to be. If he's challenged and (the offense) makes a play, then he comes back because he learns from his mistake and then he goes back and corrects it. I'm really pleased with who he is, because who he is will really help us as we get into the season. He's a consistent player and he's really shown that play in and play out. Justin Gilbert is dynamic, but is learning to be consistent. When you're dynamic and consistent, then you're on another level. That's where I think he's moving toward."