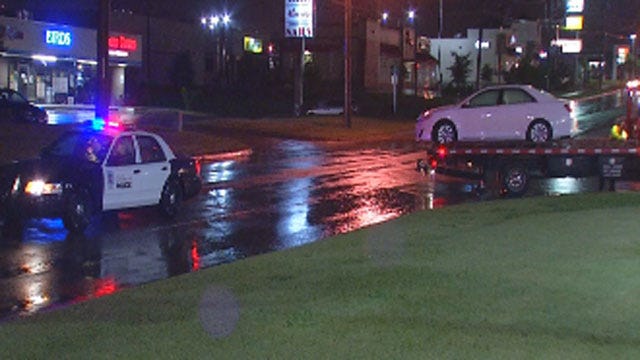 It was definitely a busy night for firefighters. The flooding was so bad, crews did dozens of high-water rescues, and the waters claimed one man's life.

"We always have a lot of calls during severe weather, but this was much worse mainly because of the flooding that occurred," said Oklahoma City Fire Battalion Chief Brian Stanland.

Heavy rain overnight into early Friday morning left countless drivers stranded, especially near Northwest 50th and I-235, which shut down due to flash floods.

Tragically, a woman stuck in her car in high water called on her father for help near Northwest 118th and Barnes, where he was swept away.

"He went to help his daughter, it was some point as he was wading off trying to reach her that he actually was swept under water and disappeared," said Oklahoma City Police Sgt. Jennifer Wardlow.

The body of 60-year-old Vincent Brown was later found near northwest 125th and Penn Ave.

A few miles away, firefighters in Nichols Hills struggled to put out flames on a home struck by lightning.

"They could barely get here, the engines stalled out, they were running through water two to three feet deep," said Nichols Hills Fire chief Terry Hamilton.

Only one man was inside at the time while his wife and three children were away. He made it out and told firefighters the lightning strike sounded like a bomb going off.

Throughout Oklahoma City and all through the morning, firefighters responded to dozens of alarms going off affected by the storms.

"This season, we have had so much rain in the city, I think the ground is just absolutely saturated so any rainfall at all creates flooding," Stanland said.

"If you come upon high water as you're driving, turn around go the other way never try to drive into high water because you can't tell how deep it is you can't tell if the road has been washed out underneath."