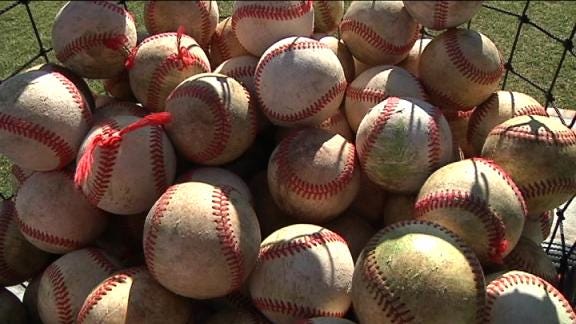 Sooners Come Back Twice To Sweep

NORMAN, Okla. – The University of Oklahoma baseball team swept CSU Bakersfield in a doubleheader at L. Dale Mitchell Park, 17-4 and 4-3, Saturday afternoon. The Sooners improved to 23-10 and the Roadrunners fell to 11-19.

Oklahoma scored 17 unanswered runs, including a 10-run seventh inning, in the opener. Trailing 4-0, the Sooners got on the board with two runs in the fourth, one in the fifth and the game-tying run in the sixth as junior first baseman Mac James (New Braunfels, Texas) drove in freshman designated hitter Niko Buentello (Lewisville, Texas), who led off the inning with a double to center.

The seventh inning started with a triple to deep center off the bat of sophomore left fielder Hunter Haley (Nacogdoches, Texas), who then scored the go-ahead run on a triple from freshman third baseman Sheldon Neuse. James added a RBI double and added another run on a bases loaded wild pitch and RBI single by senior shortstop Hector Lorenzana.

Leading 8-4, freshman Austin O'Brien entered the game as a pinch-hitter and promptly drilled a 2-1 pitch down the left field line for a three-run home run, the first of his career. The Sooners continued to reach base with only one out and Neuse came to the plate for his second chance in the inning and lifted a three-run shot over the wall in left to push the OU lead to 14-4.

In the eighth inning, Neuse hit a tape measure shot down the left field line to record Oklahoma's second two-home run game of the season. He finished the day 3-for-6 with eight RBI. Neuse also moved from third to the mound and pitched the top of the ninth inning. In his third appearance of the season, Neuse pitched a perfect inning with one strikeout.

Senior right-hander Kindle Ladd pitched 4.1 innings of scoreless relief to earn the win and improve to 2-1 on the season. He gave up just one hit and one walk, while striking out one. Redshirt-sophomore lefty Adam Choplick lasted just 2.2 innings in the start. He threw 40 pitches in the first inning and surrendered one unearned run and gave up three more in the third when he was lifted in favor of Ladd. Choplick struck out four and walked three, while giving up four runs on five hits.

Right-hander James Barragan (2-4) pitched six-plus innings in the loss for Bakersfield. He was tagged for five runs on nine hits and two walks to go with three strikeouts.

Haley went 3-for-4 with three runs scored and two triples, while James finished 3-for-5 with two runs and two RBI.

In game two, Oklahoma got on the board first with two runs in the fourth. Haley led off with a double down the left field line and scored on a single up the middle by Lorenzana. With two outs and nobody on, junior second baseman Joshua Ake kept the inning going with a single center and came around to score on a base hit through the left side by sophomore catcher Anthony Hermelyn.

Freshman right-hander Jake Elliott was perfect through the first four innings in the start for the Sooners. He ran into trouble in the sixth when he gave up a game-tying, two-run home run to Bakersfield shortstop Mylz Jones. Elliott gave up a second home run in the seventh to designated hitter Max Carter as OU fell behind, 3-2.

The Sooners staged a comeback in the eighth inning as Ake and center fielder Craig Aikin got the rally started with back-to-back, one-out walks. After an error, Neuse tied the game with a single to right field and James delivered the go-ahead run with a sacrifice-fly.

Elliott went seven innings in a no-decision. He allowed three runs on four hits and one walk, while striking out seven. Redshirt-junior right-hander Robert Tasin earned the win in one inning of work to improve to 3-2. Sophomore right-hander Ralph Garza Jr. locked down the save, his seventh of the season, with a clean ninth inning that included two strikeouts.

Left-hander Austin Davis (1-6) threw 149 pitches in the loss for the Roadrunners. He pitched 7.1 innings and scattered 12 hits and five walks, yielding four runs, three earned, to go with four strikeouts.

The Sooners remain at home for a non-conference game on Tuesday against intrastate rival Oral Roberts at 6 p.m.

STILLWATER, Okla. – Oklahoma State had its four-game winning streak snapped Saturday as No. 25 Texas Tech defeated the 20th-ranked Cowboys, 16-6, in front of a near-capacity crowd at Allie P. Reynolds Stadium.

The 16 runs allowed by the Cowboys is the most an OSU opponent has scored this season. Coach Josh Holliday's club had not allowed more than four runs in its previous 10 games.

TTU took command early against OSU starter Tyler Buffett, who suffered the loss and fell to 2-1. Adam Kirsch got things going with a home run to lead off the top of the second, one of two round trippers on the day for the Red Raiders' designated hitter as he finished 3-for-5 with six RBIs.

The visitors were not done as later in the inning, Tim Proudfoot delivered an RBI single to put TTU up, 2-0.

The Red Raiders tacked on a run in the third inning, then rallied for six runs on four hits in the fifth. In that inning, Kirsch picked up two RBIs on a double, while Zach Davis and Tyler Floyd each collected two-RBI singles to push the TTU lead to 9-0.

After being shut out in each of the first four innings by TTU starter Johnathon Tripp, the Cowboys finally tallied a run in the fifth. Gage Green led off the frame with a single, a hit that ended Tripp's day on the mound, and three batters later, Tim Arakawa made it 9-1 with a two-out, RBI single.

TTU rallied for multiple runs in the sixth, seventh and ninth innings, while OSU's lone multi-run inning came in the seventh.

In that inning, pinch hitter Andrew Rosa delivered his first-career home run, a two-run blast to left field, and Hunter Hagler followed with the first homer and first RBI of his career.

ORU fell one game behind the Bearkats in the conference standings with a 4-7 SLC record as the Golden Eagles moved to 14-15 overall this season. SHSU improved to 20-11 overall and 5-6 in league play.

Guillermo Trujillo had a good showing in the start on the mound for ORU, but was unable to get a decision in 6.2 innings of work with six strikeouts. Jordan Romano (1-2) entered in the top of the seventh with two outs, striking out three in the final 2.1 innings, but took the loss.

SHSU starting pitcher Jason Simms (2-2) threw a complete game, allowing a run on six hits and struck out six. Carter Burgess scored both runs for the Bearkats, finishing with two hits, including a double.

All six of the Golden Eagle hits in the game came in the first five innings, with Anthony Sequeira and Logan Domenico each reaching safely twice. Domenico drew a walk to start the bottom of the first and scored on a wild pitch to give the Golden Eagles an early 1-0 lead.

It was the fourth time in five games Domenico had started the game for the Golden Eagles by reaching base and scoring.

Following a single by Domenico in the bottom of the fifth, the Golden Eagles were kept off the base paths in the final 4.2 innings of the game.

Burgess scored for the first time in the game in the seventh inning as he singled and eventually scored on a pinch hit single by Ryan Farney to right field to tie the game at one.

In the top of the ninth, Burgess came up big again for the Bearkats, ripping a double down the left field line to start the inning. Two batters later, Dylan Ebbs singled to right to bring Burgess home as the winning-run.

ORU and SHSU will battle for the series victory in the rubber match on Sunday at 1 p.m. at J.L. Johnson Stadium.