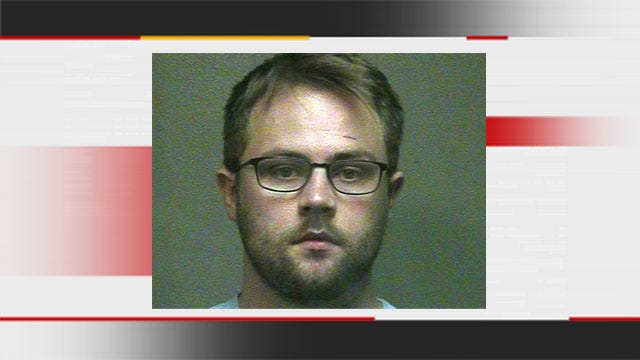 This morning, the district attorney filed four felony counts against Preston Rhoads, who has been at the Oklahoma County jail since last Thursday.

The charges state Rhoads solicited a former coworker to kill his girlfriend and unborn child with ricin and even offered him a sum of money to do it.

It also said Rhoads was thwarted from completing the murder-for-hire plot because of the intervention of law enforcement.

The district attorney credits that coworker with saving that pregnant girlfriend's life.

The state arrest warrant reads very much like the federal search warrant and Affidavit unsealed two days ago.

It states the FBI was contacted by that former coworker, who informed them that Rhoads and him exchanged a series of text messages on April 7, and when they met in person at Rhoads home on April 9, Rhoads asked if he was familiar with the show "Breaking Bad" and showed him a vial of white powder claiming it was ricin.

Rhoads told the former coworker he had downloaded a poison manual from the Internet on how to manufacture it and went on to tell him he wanted to hire him to poison his girlfriend and her unborn child.

It states Rhoads had several scenarios to facilitate the poisoning, including placing the ricin in a soft drink, or sprinkling the ricin on a pizza and offering money to the coworker so he would pose as a pizza delivery guy.

The coworker refused and contacted police, which resulted in a joint investigation by the Oklahoma City Police Department and the FBI.

Several officers had to go through decontamination procedures, and the FBI confirms the police cars used to hold and transport Rhoads were shipped off to the Edmond police training facility to be processed and tested for chemicals.

The FBI cannot comment on those tests at this time.

Multiple sources confirm to News 9 that a substance found in Rhoads' home tested positive for Ricin. However, the substance was only found inside the home and police officers were not exposed.