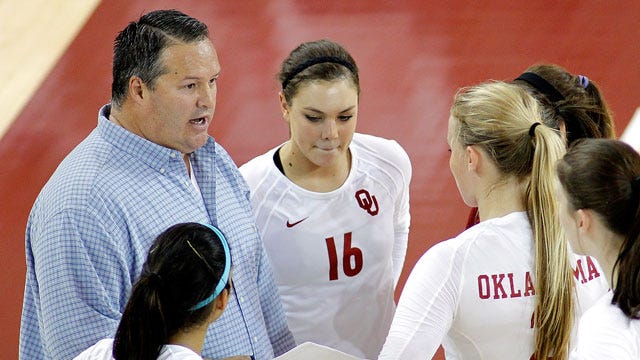 This trip has been on Oklahoma volleyball coach Santiago Restrepo's mind for quite some time.

"This is a trip I wanted to do since I got here," Restrepo said. "We just didn't have the money.

This week, the Sooners head for Europe for an 11-day trip through the Czech Republic, Austria, Slovenia and Italy. While overseas, the Sooners will play six matches against club teams and junior national teams.

The success the Sooners have achieved over the past 10 years under Restrepo is the biggest reason why he is finally able to take his squad overseas. Wins lead to fan support and fan support leads to better fundraising and more money.

"The money comes from raising money and purring it into our Ace Club account," Restrepo said. "Our Ace Club members try to do different activities throughout the year to raise money and fundraise.

"A lot of teams that have been successful have been able to take trips overseas."

The NCAA allows Division I teams to take an international trip once every four years and as part of that, teams can practice up to 10 times before leaving and play six games on the trip itself. These trips are becoming more and more common, even within Oklahoma. The Oklahoma State and Oklahoma men's basketball teams have gone overseas in the past two summers.

"It's really advantageous for our program, especially now that we have a lot of youth and a lot of people that are young," Restrepo said. "It's extremely important in the aspect it (the matches) doesn't count on your record. Now we're going to experience seeing them play when it doesn't count and they're calm and collected and trying to build on that chemistry with each other."

The Sooners will have a roster that contains just five upperclassmen this year. It takes time for that much youth to come together as a team, so this trip will do a lot toward helping the chemistry of the team grow. On the flip side, the teams Oklahoma will be facing will be seasoned veterans and have been together for many years.

"The advantage they have is that they have been playing club together forever and they grow up together, going to school, training," Restrepo said. "The chemistry will be a lot better for them. They are used to each other a lot more. I think that's the main difference. Plus, they play at a much higher level because they compete against the best."

One of the biggest pieces for the Sooners' future is freshman middle blocker Marion Hazlewood, who has been in Norman since January after graduating from high school early. Hazlewood has big shoes to fill thanks to the graduation of Sallie McLaurin, so the extra practice time has been great for her especially.

"Marion's supposed to be in high school and I don't think she would have progressed as much as she has if she wasn't here with us," senior outside hitter Tara Dunn said.

The void McLaurin leaves is going to be filled by several new hitters, hitters that have to get on the same page as Doyle.

"With all these new hitters, our setting is going to be different because I have a lot of girls to set," junior setter Julia Doyle said. "I've been working on connecting with each hitter and making sure we're on the same page."

While the volleyball will be intense and very much a learning experience, Restrepo is excited for his team to experience the different cultures of the various countries they'll be visiting.

"I think we have everything planned out for everyone," Restrepo said. "It's going to be exciting. It's pretty neat to get into the culture. There is so much tradition and history in the European countries. It's going to pretty neat to have them all travel and check out all the places."

When asked what place they were most excited to visit, Restrepo and Dunn both went with Venice, Italy.

"It's like walking through a maze," Restrepo said. "It's actually pretty neat to walk around and see the architecture and the old buildings and how that city is still up above water. It's really cool."

Doyle went with a different option.

The NCAA volleyball Final Four is conveniently located in Oklahoma City this year. The Sooners have been planning for two years to get there, and the hometown advantage is as big a motivator as anything.

"Just kind of looking at our schedule and different things, we have a chance if we play consistent and stay at a really high level, which I know we can do," Dunn said. "We have a great group of recruits coming in next year. We're going to be very young, but I don't think that's going to be a problem. If we do what we need to do, we have a shot at being there. With it being in Oklahoma City, I think it is icing on the cake because it so close to home and we'll have such a big fanbase."

Even on a trip halfway around the world, the goal remains making a simple, 20-minute drive up Interstate 35.

News On 6 The Mother Road Market is partnering with several businesses to hide eight medallions in interesting spots along the mother road.

News On 6 The Mother Road Market is partnering with several businesses to hide eight medallions in interesting spots along the mother road.
View More Stories

News On 6 The Mother Road Market is partnering with several businesses to hide eight medallions in interesting spots along the mother road.

3 Arrested On Suspicion Of Connection To Death Of Bartlesville Man

News On 6 Three people are in custody on suspicion of being connected to a man's death in Bartlesville.