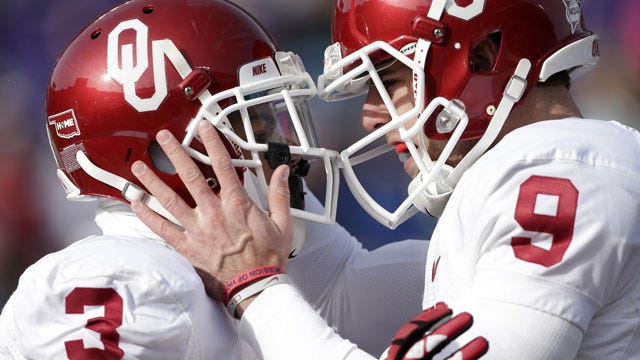 The season is finally upon us and we'll get our first glimpse at the very-hyped, but unproven, Oklahoma Sooners Saturday night in Norman when the Sooners take on Louisiana Tech.

The hype machine has been very high on the Sooners since an impressive victory over Alabama in the Sugar Bowl back in January, but there are plenty of detractors pumping the brakes on anointing the Sooners one of college football's elite.

Therein lies the beauty of the season: now we finally get to see if the hype is real or if the pessimists of the world score another victory. As always, the answer is probably somewhere in the middle of those two extremes.

Related Story: Oklahoma Football: Start Of The Season 'A Relief' For The Sooners

It would be unrealistic to expect the Sooners to take on the 2014 season the way they did the Crimson Tide, with a full month's preparation and a massive chip on their collective shoulder. But with all the talent the Sooners have, it's just as possible that team—or a better version of it—romps through the regular season and into the College Football Playoff.

Again, we just don't know. That's what makes sports so much fun. It's not just about the game or the product two teams put on the field every Saturday. It's about discovery and finding answers to curious questions. It's entertainment at its finest.

Oklahoma is going to be a good team in 2014. To be anything less than that would be a major surprise. There are questions about this team, but none that would make the difference between great and mediocre. The biggest question—that can't and won't be answered for some time—is just how good can the Sooners be this year?

We'll begin to answer that question at 6 p.m. Saturday night as the Sooners take the field for the first time. It will be awhile before a final answer can be provided, so the speculation will continue.

But the process of discovery is about to begin, for both those watching the game and those playing.

1. What skill position players will step up?

The inexperience at wide receiver and running back for the Sooners has been well documented and it's time to see who is going to step up and fill the gaps left behind by last year's seniors. At running back, sophomores Keith Ford and Alex Ross, along with freshman Samaje Perine will all have an opportunity to showcase their abilities. All three are bruising backs that don't shy away from contact. With a veteran offensive line, the OU run game could be very dynamic in 2014. At receiver, redshirt freshman K.J. Young joins juniors Sterling Shepard and Durron Neal as a starter, with Michiah Quick and Jordan Smallwood likely the next men up. Shepard is a star, and Neal has shown himself to be a capable receiver, but the quality of the group will be determined by the performance of the other young guys. Young, Quick and Smallwood appear to have the first shot at impressing, but there is a host of young talent chomping at the bit behind them.

2. How will Trevor Knight look?

Anyone expecting Knight to look like he did against Alabama is probably going to be disappointed (or not, considering Louisiana Tech is no Alabama). It's also unlikely Knight reverts back to the nervous, indecisive version of himself we saw at the beginning of last season against Louisiana-Monroe and West Virginia. Knight has matured a lot, both on and off the field. On the field, his play was dramatically different at the end of the season and off the field, players have been commending him for stepping up into a larger leadership role and taking players under his wing. Knight is the Sooners' guy and only injury or a complete meltdown will push Bob Stoops in a different direction. Here's betting that doesn't happen.

Related Story: Questions About Knight Should Revolve Around Health, Not Performance

3. How will the defense fare without Frank Shannon?

Even with Shannon technically able to play, Stoops has elected to go with Jordan Evans at middle linebacker for the opener since he doesn't know if Shannon will be available going forward. Shannon was the Sooners' leading tackler a year ago and will be missed. But Evans is a very capable player and showed a lot of talent when he was on the field a year ago. The fact Evans is surrounded by three veterans in the linebacking group is also a huge comfort for the rest of the OU defense. The Louisiana Tech ground game will be a good first test for the OU front seven, as running back Kenneth Dixon is an excellent player and is probably among the top backs OU will face this season. There may be an adjustment period on the field without Shannon, but here's guessing it won't be a complete catastrophe.

Dixon rushed for 917 yards a year ago in only 10 games, averaging 6.1 yards per carry. His freshman campaign was even better as he ran for 1, 194 yards and an NCAA freshman record 27 touchdowns. At 5-foot-10, 212 pounds, Dixon is a load that will run through arm tackles and be hard to bring down in short yardage situations.

Sokol was named the Bulldogs' starting quarterback on Monday, but basically hasn't played in over two years. The only game action Sokol saw last season as a backup at Iowa was mop-up duty in a win over Nebraska. He redshirted in 2012 after transferring to Iowa from Scottsdale Community College. La Tech doesn't have a lot of quarterback run in its offense, but its something the Sooners will have to keep an eye on.

Barnes led the team with four interceptions a year ago and leads a secondary that returns three starters. Going up against a veteran secondary will be a nice early test for Trevor Knight. Barnes had seven pass breakups and 11 passes defended a year ago, which led the team. Facing young wide receivers, Barnes could use his experience to his advantage and make life difficult for the OU offense.

The Sooners were gashed on the ground a year ago, giving up 220 yards to Notre Dame, 255 yards to Texas, 255 to Baylor and 200 to Oklahoma State. Now to start the season, they face a terrific back in Dixon, who has rushed for over 2,000 yards in his first two college seasons. The return of Jordan Phillips at defensive tackle will help the Sooners plug the middle, and depth along the defensive line will help keep guys fresh. It's a fierce test right off the bat for the OU defense, which is determined to improve on the few things it needs to fix from a year ago. The run defense was very inconsistent last year, but it needs to be better if the Sooners want to contend for a national championship.

The Bulldogs score a late touchdown after a dominating performance from the Sooners. Trevor Knight is steady and the Sooners run for over 250 yards while holding Dixon to less than 100 and harassing Sokol all night.