EXCLUSIVE POLL: Fallin Leads Dorman In Race For Governor, But Many Voters Undecided 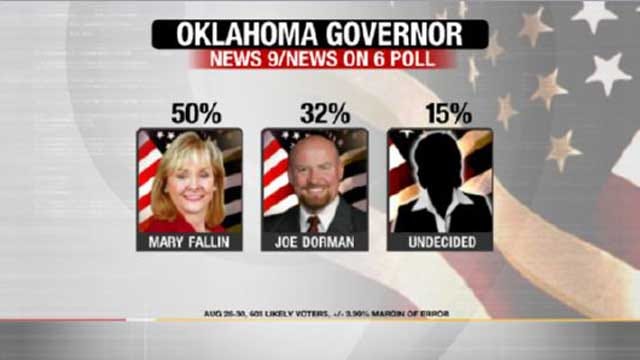 An exclusive News 9/News On 6 poll shows incumbent Republican Mary Fallin leading her challenger, Democrat Joe Dorman, in the race for the governor's seat in the November 4, 2014 election.

The poll asked voters who they would cast their ballots for if the election were today and they were standing in the voting booth right now.

It shows 50.3 percent of the voters polled would choose Mary Fallin, while 32.1 percent would pick Joe Dorman, who has represented District 65 in the Oklahoma State House since 2003.

Richard Prwadzienski, an Independent, would get 1.2 percent, while Independent Kimberly Willis would receive 1.1 percent of the votes.

An even 15 percent of voters said they were undecided.

Bill Shapard, whose company conducted the poll for News 9, said Fallin should have better numbers than these.

About the poll: SoonerPoll conducted the surveys by telephone on August 28-30, 2014 of 603 likely voters registered to vote statewide in Oklahoma. The margin of error is + or – 3.99 percent. The results were weighted by age and sex, stratified to Oklahoma likely voter demographics.

EXCLUSIVE POLL: Fallin Leads Dorman In Race For Governor, But Many Voters Undecided