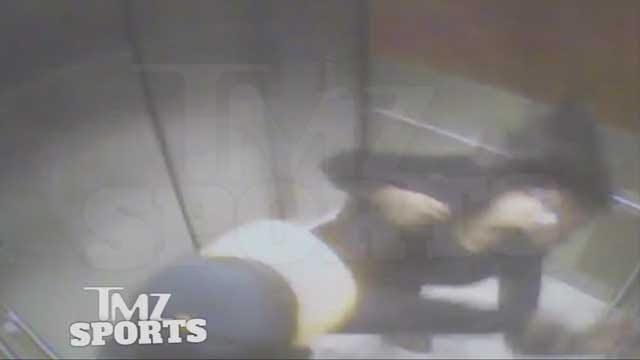 One day after Ray Rice was cut loose from the Baltimore Ravens following the release of a video showing him striking and knocking out his then-fiancee, his wife is defending her husband and blasting the media for the pain caused to her family.

"I woke up this morning, feeling like I had a horrible nightmare, feeling like I'm mourning the death of my closest friend," Janay Rice wrote in the post. "But to have to accept the fact that it's reality is a nightmare itself. No one know the pain that the media & unwanted options from the public has caused my family. To make us relive a moment in our lives that we regret everyday is a horrible thing.

"To take something away from the man I love that he has worked his ass off for all his life just to gain ratings is horrific. THIS IS OUR LIFE! What don't you all get. If your intentions were to hurt us, embarrass us, make us feel alone, take all happines away, you've succeeded on so many levels. Just know you've succeeded on so many levels. Just know we will continue to grow & show the world what real love is! Ravensnation we love you!"

The video has led many to ask why Rice was only now cut from the Ravens, and why the video did not surface sooner.

"We already knew it was domestic violence and you know that's already bad enough, like, you know, if you're only up in arms about it just by seeing the video, that's a problem," said Ravens running back Justin Forsett.

Rice and Palmer can be heard shouting obscenities at each other, and she appears to spit in the face of the three-time Pro Bowl running back right before he throws a brutal punch in a video shown to The Associated Press by a law enforcement official.

The video, shown to the AP Monday night, includes audio and is longer than the grainy TMZ Sports video released earlier that day. After the TMZ video made its way around the Internet, the Baltimore Ravens cut Rice and the league suspended him indefinitely. Rice was originally suspended for two games and coaches and others had praised his behavior since the arrest for striking his then-fiancee in February.

The videos show Rice and Palmer in an elevator at an Atlantic City casino. Each hits the other before Rice knocks Palmer off her feet and into a railing. Months ago, a TMZ video showed Rice dragging Palmer, now his wife, from the elevator at the Revel casino, which closed on Sept. 2.

The higher-quality video shown to the AP shows Rice made no attempt to cover up the incident. After Palmer collapses, he drags her out of the elevator and is met by some hotel staff. One of them can be heard saying, "She's drunk, right?" And then, "No cops." But Rice didn't respond.

The video was shown to the AP on condition of anonymity because the official isn't authorized to release it.

Coach John Harbaugh said he met with Ravens owner Steve Bisciotti, team president Dick Cass and general manager Ozzie Newsome after they saw the TMZ video, and they made the decision to let Rice go.

"It's something we saw for the first time today, all of us," Harbaugh said. "It changed things, of course. It made things a little bit different."

The action represented a complete reversal for the team, even though an Atlantic City police summons stated that Rice caused "bodily injury to Janay Palmer, specifically by striking her with his hand, rendering her unconscious."

The Ravens had used words like "respect" and "proud" in referring to Rice following his arrest.

When the NFL announced Rice's two-game suspension for domestic violence on July 24, Newsome said: "We respect the efforts Ray has made to become the best partner and father he can be. That night was not typical of the Ray Rice we know and respect. We believe that he will not let that one night define who he is, and he is determined to make sure something like this never happens again.

Asked Monday night if Rice misled him, Harbaugh said he didn't want to get into "all that."

"I don't think of it that way. Everything I said in terms of what I believe, I stand by," he said. "I believe that still, and I'll always believe those things, and (we'll) always stand in support of them as a couple, and that's not going to change."

Rice said in a news conference this summer that his actions that night were "inexcusable." But the Ravens never took action against him until after the second video was released.

The NFL, which has been working hard to promote the game to women, also took action after the explicit video was released. Commissioner Roger Goodell announced that, based on the new video evidence, Rice has been suspended indefinitely.

"We requested from law enforcement any and all information about the incident, including the video from inside the elevator," NFL spokesman Greg Aiello said Monday morning. "That video was not made available to us and no one in our office has seen it until today."

Rice's lawyer, Michael Diamondstein, declined to comment when contacted by The Associated Press.

"Obviously, any video that depicts an act of violence in that video is disturbing to watch. For our union, we have an unshakable position against any violence, certainly domestic violence included," NFLPA executive director DeMaurice Smith said at the Seahawks' facility in Renton, Washington. "It will be a time for us now to catch up with everything else that has occurred today."

He had been charged with felony aggravated assault in the case, but in May he was accepted into a pretrial intervention program that allowed him to avoid jail time and could lead to the charge being purged from his record.

After Goodell drew criticism not being tough enough on Rice, he wrote a letter to all 32 NFL owners in August saying he "didn't get it right."

Rice began his suspension Sunday, when the Ravens opened their season with a 23-16 loss to the Cincinnati Bengals. He was scheduled to return after Thursday night's game against Pittsburgh.

He leaves the Ravens as the second-leading rusher in franchise history, behind only Jamal Lewis. A three-time Pro Bowl selection, Rice is the team's career leader in total yards from scrimmage (9,214) and is the only player in Ravens history to rush for 1,000 yards in four consecutive seasons.

But those are mere numbers, and his actions in that elevator shed a new light on him.

"I'm not going to go into what he told us or anything or if it matches or if it doesn't," Ravens receiver Torrey Smith said. "That doesn't matter. What matters is what you see. It wasn't a pleasant sight at all."

Rice hasn't spoken often to the media since his arrest, but on July 31 he said this is "something I have to live with the rest of my life."